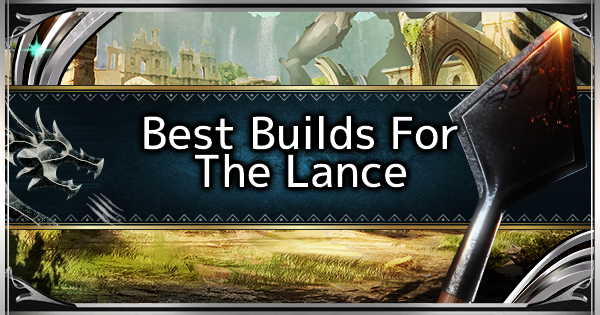 This set is inspired by the armor build originally shared by Thales Moustache on Youtube.

If you prefer to have longer white sharpness, activate Handicraft Lv5. You can do so by switching your charm to Handicraft Charm III or use change Critical Jewel to Handicraft Jewel.

Highly Customizable Build For The Lance

Build That Is Very Customizable

This Lance build can be customized according to what you need. The Taroth Crest Claw has high attack power and can be augmented twice, allowing flexibility in what you can do with this build.

Swap Charms For Skills You Need

The good thing about this build is that you can freely swap out your charms to change your loadout. Equip an Attack Charm to boost your raw power or even a Health Charm to increase your HP bar.

Versatile & Flexible Build For The Lance

Can Be Use In Variety Of Hunts

This build is very versatile, flexible, and easy to use in any type of hunt. Though the attack power isn't that high, this set boosts your affinity rate & critical damage enough to make up for it.

High Damage Build For The Lance

With this build, you'll be dealing huge amounts of critical damage to any monster you encounter. Critical Eye, Attack Boost, Critical Boost, and Weakness Exploit will all work together to down monsters fast.

Lunastra Weapon Build For The Lance

This build specializes in survival during tough or elongated hunts. With skills such as Health Boost, Recovery Up, Recovery Speed, & Super Recovery, your health bar won't go down as fast even during tough fights.

If you follow this build and have enough Handicraft skills, you can get your weapon up to white sharpness.

With the Kjarr Crest Spark's strong thunder stats, this build focuses on amping up your elemental attack even more. With Critical Element, you'll deal more lightning damage when you land critical hits.

Why do you have 7 ranks of guard on first build but not guard up...

Iceborn Middle Phase Build
- chest armor should be Acid Galv, which is the other +2 Handi and the Partbreaker. Fulgar Mail is Stun Resist 1 and Flinch Free 1.