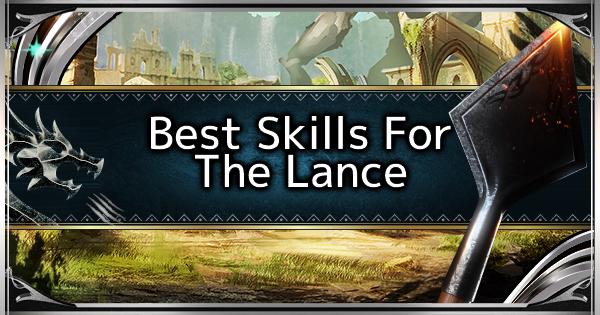 Can Guard Against Powerful Monster Attacks

The Lance is known for its high defense and impenetrable guarding capacity. When you're able to guard well & build up your charged attacks, you can deal massive damage to monsters without losing HP.

DPS Can Be Staggered During Hunts

The Lance attacks very slowly and combos need to be made to deal continuous damage. Make use of Guard steps and counters to keep your damage up during hunts.

This skill lessens the stamina you consume when you guard, allowing you to keep sticking close to the monster to deal close-range damage to it.

Can Guard Against Powerful Monster Attacks

With this skill, you'll be able to protect yourself from deadly monster attacks, especially from those that can easily bring down your HP bar. A must-have skill for Lance users!

Having the Handicraft increases your weapon sharpness. This lessens your need to sharpen your weapon and prevents you from being open to monster attacks.

Skill To Further Elongate Guard Use

This skill also reduces stamina consumption when you use your guard capabilities. This is great to have for all Lance users in Monster Hunter World.

Resentment increases your attack power when you have recoverable health in your HP bar. This is good to use when you've mastered countering, letting you deal extra damage to monsters when you counter.

Evade Window is nice-to-have when you're using a Lance. Since the weapon is slow, this skill gives you extra invincibility time when you're rolling away from any monster attack.

Having this skill will lessen the chances of your attacks deflecting on a monster's tough hide. You'll be able to deal more consistent damage and lessen the stagger caused by the deflects.

Essential when playing multiplayer mode, this skill prevents you from getting knocked back or staggered when you suffer small damage. It'll keep you moving and let you move around quicker.

With this skill, if you keep landing critical hits, you will greatly lessen your need to sharpen. This is a perfect skill to combine with Critical Eye & Critical Boost.

You are referring to earplugs