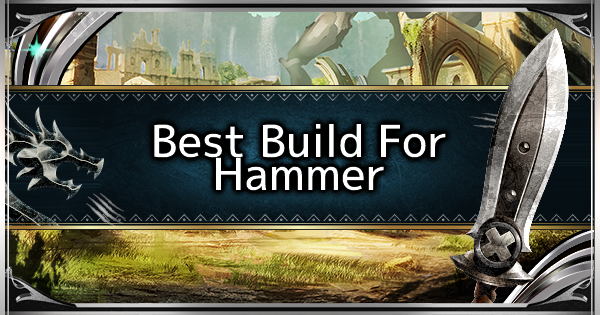 This build is inspired by the original set shared by RageGamingVideos on Youtube.

Check Out How To Use The Hammer Here!

The Taroth Hammer Sleep boasts one of the highest damages in the hammer category. This loadout will further increase the damage output of the weapon & make you a force to be reckoned with!

Use The Roar To Your Advantage

This build will give you an advantage when the monster roars. Negate the effects & use the roar as an opportunity to continue attacking the monster! Deal as much damage as you can due to the skills that increase your DPS!

The Handicraft skill increases the weapon's sharpness, prolonging the time you can deal substantial damage to the monster. The Master's Touch skill will also prevent the lowering of your weapon's sharpness when dealing critical hits!

This build puts a heavy emphasis on survival. Since the hammer can be slow at times, this build will help you absorb more attacks so that you can focus on dealing damage to the monster!

With the Fire Attack skill at level 5, you will be able to utilize the Kjarr Hammer "Gyre"'s fire damage to its full potential! Aim for the weak spots to deal a large amount of critical damage!

The skills in this build allow you to deal the maximum water damage using one of the strongest water element hammers in the game. Make sure to aim for weak spots to deal bonus damage when you crit!

This build will push the Kjarr Hammer "Ice" elemental damage to its limit! You'll be able to deal a huge amount of damage to monsters, especially when landing hits on their weak spots!

This build will push the weapon's thunder damage to its maximum. This is especially useful when engaging monster that are weak to the lightning element! Make sure to hit their weak spots for maximum damage!

This build will allow you to deal the maximum amount of dragon damage to enemies. Furthermore, bonus damage will be applied when you are landing hits on a monster's weak spots!

So comments just don't show up do they?