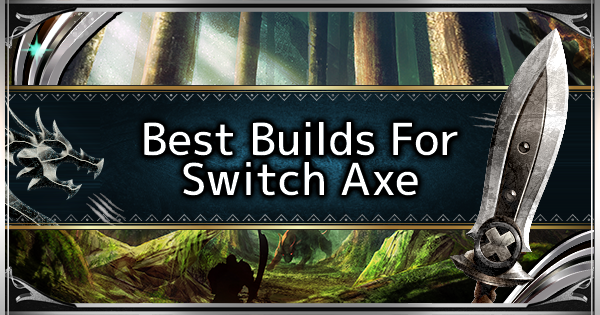 This set is inspired by the armor build originally shared by aquCHAOS on Youtube.

This set is inspired by the armor build originally shared by Thales Moustache on Youtube.

This build focuses on using the full potential of the Master's Touch skill that comes with the Drachen armor set. Combined with the high attack power of the Terror Tyrannos, this set is built for maximum damage & reduced loss of sharpness.

With this Switch Axe build, you will have very high affinity and critical rates, allowing you to do a lot of damage per hit. Sacrificing weapon sharpness, this build also has a bit of survival features with the Evade Extender skill.

The weapon featured in this build has an extremely high attack power with no elemental attribute, making it viable against any monster. It is also a very mobile with its Evade Window & Evade Extender skills.

With the Taroth Axe Water's powerful water attack damage stat, this build focuses on amping up your elemental attack even more. It also focuses on survival during the hunts with Evade Window, Health Boost, and etc.

This build fully exploits the Master's Touch skill for high crit rate & reduction of sharpness loss. With this weapon, you'll do more Thunder attack damage due to its high elemental attack stat.

This build focuses on adding chances to paralyze monster with every hit, making it immobile & open to a flurry of attacks. This set also activates Earplugs Lvl 4 when Hunter uses their Zero Sum Discharge attack.

This weapon only has one slot for augmentation and it should be Health Increase. This will increase your survival rate so you can do more hits and increase your chances of paralyzing the monster.

This build focuses on breaking monster parts through the use of the Blast attribute. It doesn't have much attack boost and isn't recommended for speed hunting but it's best used when farming materials or monsters parts.

Set Allows For Flexibility In Decorations

You are free to swap out any of the decorations you've put into this set, making it a flexible build that can improve your gameplay and quality of life in the game.

This entire build seems kind of off. Why use the Glow when you can use the Gold Rathian axe for higher raw damage and comfy white sharpness. Purple isn't that important and sword mode gives mind eye.

agreed with guy below. the deco list for it seems to be far from complete O.o

The End game "DPS & Evasion Build" is incorrect and cannot be replicationed.
The Barioth helm, for example, does not have 2 decorations slots for "size 2 gems" to be able to fit the 'required' jumping and enhancer jewel.