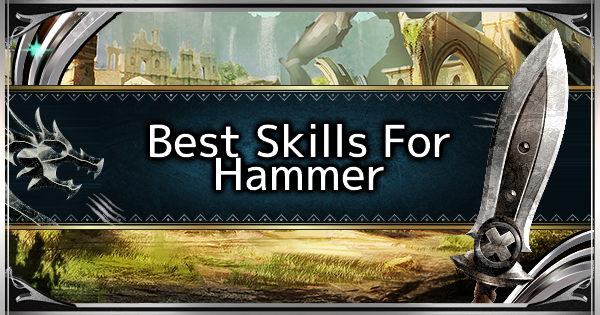 The Hammer is a heavy blunt type of weapon that specializes in dealing massive amounts of damage to a monster. It will be able to knock down or stun a monster. However, some of its attacks require you to charge before unleashing them.

The Hammer also possesses the Power Charge feature. You will be able to boost your attack power until you sheathe your weapon or take damage. In the right hands, the hammer is an extremely deadly weapon!

Useful For Any Weapon Type

This skill is a must-have for all weapons as the skill raises your attack power and affinity at higher levels. This skill will do exceptionally well to amp up the hammer's damage!

Hammers are best used for stunning monsters by hitting their heads. Since several monsters have their heads as weak spots, you can pair this skill with the hammer to massively increase your affinity rate when hitting monster heads!

This skill will give your weapon a longer sharpness gauge so it will take longer for it to dull. This is especially handy for hammers as they are weapons that can easily lose their sharpness when fighting monsters.

Opportunity To Attack The Head

Earplugs at the highest level will negate the roar effects of any monster that you encounter. You can use this opportunity to attack the monster's head and stun it.

The Hammer will not be able to block attacks like other weapons. Hammer users will spend a good amount of time attacking a monster's head making them vulnerable to multiple attacks. Since evasion is the only option, this skill is very useful.

This skill will be useful for longer drawn-out battles as it helps you easily exhaust the monster that you're hunting. However, remember to replace this skill when facing elder dragons as this skill will not work against them.

Pair With Other Skills For Maximum Effect

Critical Boost is very useful when paired with other skills such as Weakness Exploit. The more often you land critical hits, the better as this skill will increase the damage that you deal when you crit!

The Focus skill will shorten your charged attacks wind up time while simultaneously increasing gauge fill rate. This is useful as your attack speed will increase with a slow weapon.

Excellent With the Diablos Shatterer

The Bludgeoner skill is a situational skill that is perfect for the Diablos Shatterer hammer. Please note that this is a skill acquired from Diablos Mastery so you will need to have 2 pieces of Diablos equipment on your hunter.