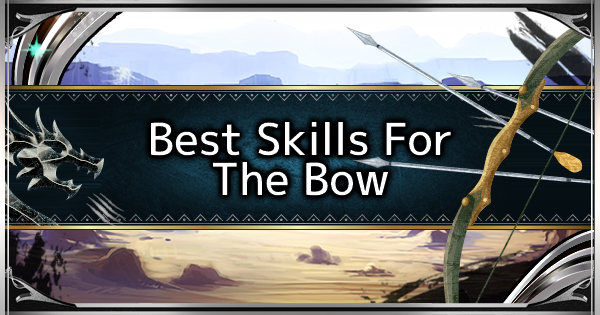 Read this Monster Hunter World: Iceborne guide to know the best and recommended armor skills for the melee weapon - Bow!!!

Has 2 Types Of Ranged Attacks

The Bow has 2 types of ranged attacks - normal arrows that pierce through enemy hide & powered up arrows called Charged Shots. Fix your build according to the type of ranged attack damage you want to deal to the monster you're facing.

The Bow can bring down your stamina bar pretty fast when doing Charged Shots or Charged Steps. Skills that increase stamina or speed up stamina recovery are highly recommended in every build for Bow users.

:P: The Bow is very compatible with weapons with elemental attributes since their damage isn't affected by motion value. It's also good to augment these weapons with Attack Increase to add more firepower.

Charging Steps are essential in the process of making bigger Bow damage but consume a lot of stamina. Constitution lessens the stamina consumption of evading, etc., allowing you to charge up your bow faster.

When you draw the Bow and aim, this adds a critical bonus until you let go of the string. Be sure to level it up to maximum to receive the highest critical hit bonus.

The Bow is very effective in dealing elemental damage and abnormal status effects. If you utilize elemental attributes in the game, you'll be able to do increased damage to any target monster.

A useful skill to increase the damage of your Bow's Power Shots. Recommended for all Bow users. It's best in tandem with the Spread/Power Shots skill.

A recommended skill to equip for Bow users as it powers up your Bow's normal arrows. It's best in tandem with the Spread/Power Shots skill.

Increases your Bow's charge levels by one, allowing you to deal more damage with your Charging Shots. It's a very good skill to have when hunting with a Bow.

Increases the speed of your stamina recovery and is an essential skill to equip when using the Bow. This lets you do Charging Steps & Shots more often, to deal more damage with your shots.