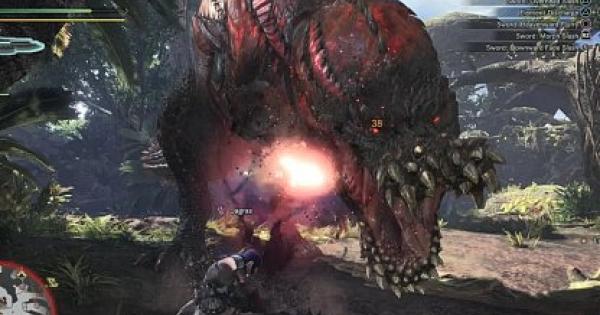 MHW: ICEBORNE
How to Beat Deviljho - Tips and Recommended Gear

Read this Monster Hunter World: Iceborne guide on how to defeat Deviljho. Learn Deviljho's weaknesses, recommended loadout, hunting tips, its moves and how to counter them!!!

The Deviljho's main weak spot is its head. Hitting its head with blunt damage makes it prone to stunning, allowing you to deal free hits on it.

When hunting the Deviljho, focus your fire on its long and wide tail. Cutting it off early in the fight will reduce the tail swipe move's hit box, making it easier for you to draw near to it.

Since Deviljho is pretty tall, if your weapon is short-ranged it's best to focus on Deviljho's legs to trip him. When he trips, he'll be open for attack from all party members.

When fighting against Deviljho, it's best to bring Poison Ammo or Knives to inflict status effects on the monster. It is also vulnerable against items such as Tinged Meat & Flash Pods and traps such as Shock Trap & Pitfall Trap.

Can Still Damage You When In Pitfall Trap

Be careful when trapping Deviljho as it can still damage you when it falls into a Pitfall Trap. If you want to capture it, be sure to use the Tranq Bomb away from its face.

When a Bazelgeuse is in the same area as the Deviljho, try to incite a Turf War between them. This can deal a great amount of damage on both monsters, possibly giving you an advantage in the hunt.

The Deviljho has 2 known weak spots - its head and chest area. These are both breakable and are prone to all types of weapon damage.

The Deviljho is prone to status effects and can be baited to eat both Tinged & Drugged Meat, giving players opportunities to attack the monster. Nulberries and Adamant Seeds are recommended to counteract the monster's Dragonblight & Defense Down status effects.

Bites Can Affect You With Defense Down

The Deviljho's bite is deadly as it can inflict you with the Defense Down status effect. This lowers your defense, making you vulnerable to the rest of Deviljho's heavy physical attacks.

To remove the Defense Down status effect, consume an Adamant Seed. This will return your defense to normal levels.

The Deviljho has very strong body tackles and jumps that can easily bring your HP bar down. Be sure to keep your distance to avoid taking too much damage.

If you're not careful, you can get hit by the Deviljho twice when it does its Tail Swing attack because it turns twice. Roll away or move a distance away to keep your HP bar up.

You can lessen the range of the Tail Swing attack by cutting the Deviljho's tail.

Dragon Breath Has Wide-Range In Front Of Deviljho

The Deviljho's Dragon Breath is very scary and his an extremely wide range in front of it. When it does this attack, move behind it to avoid getting damaged & getting the Dragonblight.

Use Nulberry To Remove Dragonblight

You can consume a Nulberry to remove the Dragonblight status effect that the Deviljho's Dragon Breath can inflict on you. Be sure to bring this item in your Pouch when hunting this monster.

Stomps On Ground That Can Stagger

When the Deviljho raises one of its legs, it will do a strong ground stomp that will inflict ground tremors & stagger you. Dodge when he stomps to avoid getting staggered.

Can Pick Up Other Monsters In Its Mouth

I prefer to have dragon resist gems x3 in my build instead of blight resistance(if your dragon resist # is over 25 you won't get dragonblight, period)
Def lock(iron skin) X3 will stop any defense down from his bite
Wind resist can lessen the damage from his dragon smoke/blasts he attacks with