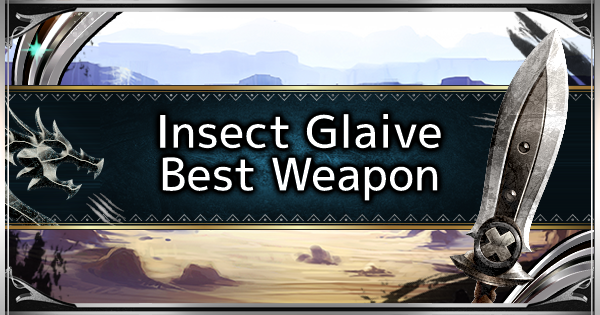 Read this Monster Hunter World: Iceborne Insect Glaive guide on the best weapon tier ranking & by elements. Find out info on stats, weapon skills, and why they're good!!!

Notice: We are still investigating best weapon in Iceborne. Please wait for update.

Electrorod's raw base damage is 775 plus a good 360 blast damage, making it one of the highest damaging Insect Glaive.

Electrorod has a decently long white sharpness gauge which can be extended more with Handicraft, giving it an edge in damage retention.

Good From The Get-Go

Electrorod requires no Free Elem/Ammo Up Skill to reach its full potential.

Want One? Check out how To Beat Brachydios and get yours Today!

Deadline already has its long white sharpness gauge fully provided, allowing you to forgo Handicraft & focus on something else.

With +25% Affinity, Deadline can be a good addition for any Crit-based builds.

Comes With Elderseal & Dragon Damage With No Extra Requirements

Unlike most endgame weapons that have Elderseal & Dragon Damage locked behind a Free Elem/Ammo Up skill wall, Deadline has everything ready from the start.

Want One? Check out how To Beat Ebony Odogaron and get yours Today!

High Raw Damage And Much Utility

Kadachi Vipertail II has a high raw damage of 775, a 240 Paralysis, 10% Affinity with 2 slots tossed into a single bundle, giving it much utility and flexibility.

Though very short, Kadachi Vipertail II can reach purple sharpness gauge through the Handicraft Skill. It might give you a good boost if you know how to plan your sharpen timing.

Want One? Find out how To Beat Viper Tobi-Kadachi for your very own!

Insect Glaive with highest attack point of 713. On top of that, Non-Elemental Boost will add to its attack power. Since it's rarity 7, you can customize twice and erase Affinity -30% to erase its weakness.

In addition to its high attack power and affinity, it has high chance of critical hit due to the skill Critical Element and 20% Affinity. Sharpness will turn white when you reach level 3 Handicraft which goes very well with Master's Touch.

Compared with Kjárr Glaive "Water", Free Elem is needed but Water Attack 360 is very appealing. You may also use it with Non-Elemental Boost depending on which element you would like to use.

Its 390 Ice Attack is the highest within insect glaive. Use it when the monsters weakness is ice such as Teostra and Lunastra. You can't miss that it has white sharpness and ③ slots from the beginning.

High Affinity goes very well with Drachen armor's Level 6 Critical Eye. It's bit tough to reach white sharpness with Level 4 Handicraft but when it's effective, you can enjoy the longlasting white sharpness.

You may also think of Grunge Storm when it comes to dragon element insect glaive. Grunge storm will have white sharpness with only Level 1 Handicraft and it also has higher attack point.

You can say it is very well balanced weapon with 620 Attack point and 300 Paralysis point. You can easily bind elder dragons by repeatedly attack with it.

With it, You will have much higher chance of surviving with Hasten Recovery. It also has ② slots and white sharpness from beginning.

Empress Cane "Styx" Is Easier To Use

Epress Cane "Styx" has Razor Sharp which extend white shapness. If you want to shorten the time using whet stone and focus on attacking, you will probably prefer Empress Cane "Styx".

I wonder if IW is missing because it lacks an inherent element, has no base affinity and really, really short white sharpness?

Just me or are these bad? No infinite wisdom?