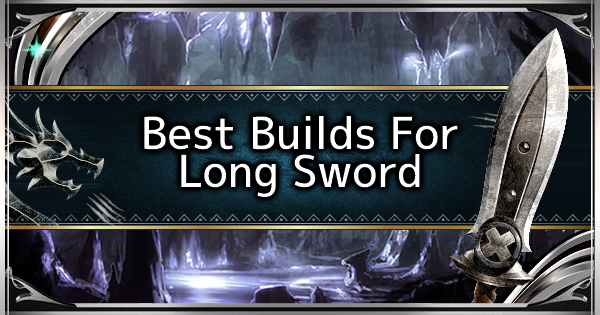 This set is inspired by the armor build originally shared by Yoda of Soda on Youtube.

This set is inspired by the armor build originally shared by RageGamingVideos on Youtube.

You can gain 90% affinity with only using materials you can get from monsters in middle phase of Master Rank.

Weapon's Affinity 15% + Critical Eye Lvl 7 Affinity 40% = 55% affinity all the time. On top of that, Weakness Exploit raises 50% when attacking wounded part of monster which sums up to 100% affinity.

Find Out How To Get Razor Sharp Charm Here!

※*Augmentation only available after reaching MR 100!!!

Because this weapon has 5 augmenting slots, you can attach both Health Regen & Affinity Increase. When used with Critical Eye & Weakness Exploit, you will have 100% Affinity On Wounded Part.

In this Long Sword build, you'll be focusing on dealing non-elemental damage! Weapon sharpness won't be an issue as the weapon has a white gauge & Master's Touch will keep it from losing sharpness with every critical hit.

This Long Sword build is generally balanced between survival, health boost, & damage capability. With skills such as Earplugs, you can last through monster roars. Plus with the Taroth Sword Fire, you'll have decent enough sharpness.

If you follow this build and have enough Handicraft skills, you can get your weapon up to white sharpness. This is crucial as the Long Sword deals a lot of hits & is prone to dulling.

With the Kjarr Sword Spark's strong lighting attack damage stat, this build focuses on amping up your elemental attack even more. With Critical Element, you will deal more thunder damage when you land critical hits.

says its updated in august but like most builds on this site, almost all of them are outdated

response to comment 8 : basically after equipping 4 rimeguard pieces,the last piece is that of barioth. to get baroths set bonus,you need 2, 1 from the equipped vambraces, and 1 from upgrading safi jiiva's weapon and gettin the barioth skill on it, thus activating the other skill.

useless guide IMO 1. of all u can get attack charm 5 so the 1 atack slot is useless
also if u play with agigator why even go for crit eye 7?

I'm confused how you're supposed to get set{2} bonuses from just one piece. when using 4 rimeguard how do you get two pieces of another set?

Id also like to know how to get weakness exploit on the middle phase build. I farmed the armor and all the same decorations like they are used in the guide above but only get a weakness exploit lvl 2