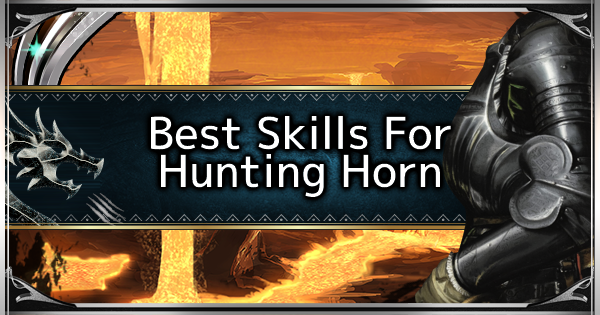 Weapon That Buffs Other Players

The Hunting Horn specializes in playing melodies that provide stat boosts to the player and their teammates. These buffs include attack or defense increases, earplugs, HP recovery, and even wind pressure negation.

The Hunting Horn is one of the only two weapons in MHW that deal blunt damage. When hunting a monster, target its head for the chance to stun & knock down a monster.

A skill specific for Hunting Horn users, the Horn Maestro lengthens the duration of buffs implemented when playing melodies. Make sure to always have this skill when you're using a Hunting Horn.

Another must-have skill for Hunting Horn users, the Slugger skill increases your blunt weapon's chance to stun a monster. This chance enlarges when you hit the monster on its head.

Since the Hunting Horn doesn't consume that much stamina except for dodging, this skill will help you increase your affinity rate. You'll be able to deal more damage when your stamina bar is full.

The Stamina Thief is a good skill to have in multiplayer hunts. With this skill, you'll be able to exhaust monsters & slow them down faster. However, this will be useless against any Elder Dragon so only use when hunting normal monsters.

Having the Handicraft increases your weapon sharpness. This lessens your need to sharpen your weapon and prevents you from being open to monster attacks.

Essential when playing multiplayer mode, this skill prevents you from getting knocked back or staggered when you suffer small damage. It'll keep you moving and let you move around quicker.

Equip When You Still Have Room

This skill is nice to have and should be added into your loadout if you still have space. It extends the distance of your rolls and dodges, keeping you out of harm's way during deadly monster attacks.