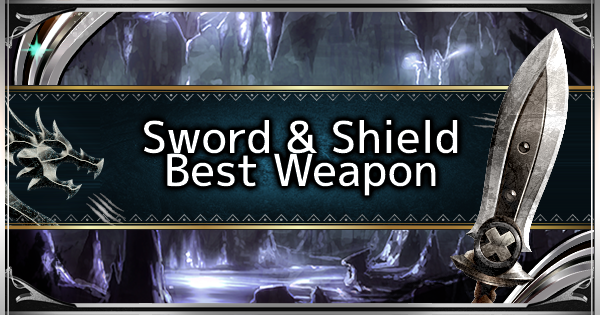 Notice: We are still investigating best weapon in Iceborne. Please wait for update.

With Free Elem/Ammo Up builds such as the Artian set, Lumu Nightmare II gets a heavy Blast damage of 480 (which exceeds its own raw damage) & becomes much more threatening.

Can Reach Purple Sharpness With Handicraft

Lumu Nightmare II can reach purple sharpness gauge with Handicraft Skill, which is helpful for a Sword & Shield.

Lumu Nightmare II lies on the top of the Paolumu tree and can be farmed relatively early on. Combined with the high blast damage you can unlock with Free Elem/Ammo Up, you now have a powerhouse weapon early in the late-game.

Want One? Check out How To Beat Paolumu and get yours Today!

Booming Barrage has a good 360 Blast damage that exceeds even its own raw damage.

Has A Long White Sharpness Gauge

Booming Barrage has a long white sharpness that helps out the quick slashing playstyle of Sword & Shield.

Good From The Start

No Free Elem/Ammo Up skills are needed for Booming Barrage, making it more viable for many builds.

Want One? Check out How To Beat Brachydios and get yours Today!

Can Reach Purple Sharpness With Handicraft

Use Non-Elemental Boost If Not Using Free Elem/Ammo Up

Want One? Check out How To Beat Shara Ishvalda to get yours Today!

Taroth Slicer "Mud" has the highest attack power (308) of all Sword & Shields, which can be further enhanced with Non-elemental Boost skill. With rarity 7, it can be upgraded twice, negating it's -10% Affinity drawback.

Good slots, Defense Bonus, and Attack Power make it a high spec choice weapon with tons of flexibility, so keep one around.

Taroth Slicer "Fire" has high Attack power, a good elemental attribute of 390, and a white sharpness gauge. Its level 3 Slot gives it much flexibility in builds.

If You Don't Want To Use Free Elem / Ammo Up Skill:

If you don't want the hassle of using a "Free Elem / Ammo Up" Skill, choose Taroth Slicer "King" as an alternative. Thought it lacks a white sharpness gauge, it makes up for it with +30% affinity.

Taroth Slicer "Water" has a staggering 420 water attack and high stats. It's better attack power than Taroth Slicer "Fire" together with +10% affinity makes this weapon a bane for monsters with water weakness.

Good Thunder damage of 330, while not requiring a "Free Elem / Ammo Up" skill to be effective unlike the Master Bang, gives Kjarr Slicer "Myth" more choices in builds.

Has A White Sharpness Gauge

A decent 330 water damage as well as having a default white sharpness gauge allows Kjarr Slicer "Stream" to maintain a stable damage output. Prepare one to combat monsters weak to water.

With over 300 Attack power, Dragon 210, and Elderseal High, Fatal Bite is highly effective vs Elder Dragons. While it has the same Attack Power with Taroth Slicer "Mud", you can increase Fatal Bite damage by turning sharpness into white with Handicraft Lv1.

Another Good Tool To Fight Elder Dragons With

Taroth Slicer "Numb"'s high affinity and paralysis allows it to be a great addition for support-oriented builds. Compared with Numb Gold Scimitar, it is a rarity 7 weapon and can be augmented twice to maintains versatility in builds.