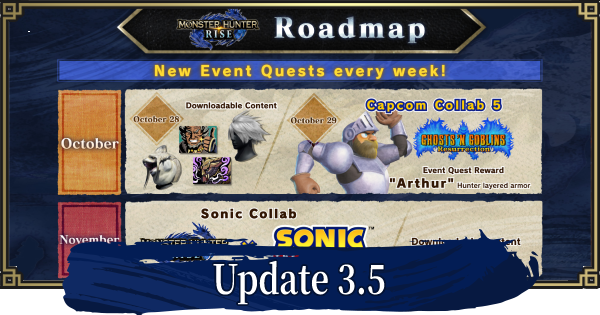 During the May 26th Digital Event, it was revealed that Monster Hunter Rise's patch that there are updates heading our way at the end of each end of the month. It is also recently released via Monster Hunter Rise Official Website that the new update 3.5 is released on October 28th!

The 3.5 Update will offer new content for all Monster Hunter Rise players. You'll just need to download the update once it is released.

Unlike how Crimson Glow Valstrax and Apex Zinogre were added to the game in the 3.0 Update, 3.4 isn't set to feature any new monster additions. The main content of the update will be DLC, Event Quests, and a special Capcom Collab!

The specific Event Quest is not announced yet, so stay tuned for updates!

It is also announced that there will be a collaboration event with Ghosts 'n Goblins Resurrection! You can obtain Arthur Layered Armor on the next event quest.