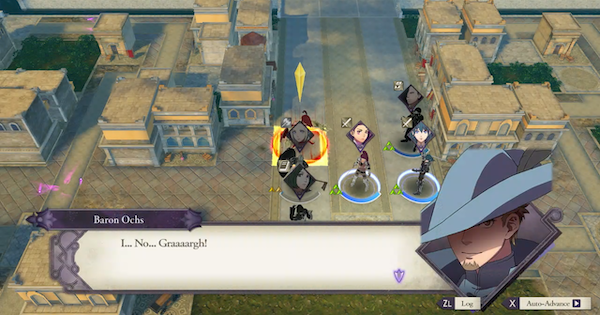 After you've beaten Cindered Shadow's side story, you can scout Balthus and Hapi in Abyss. By having them in your party, the paralogue Black Market Scheme appears after Chapter 7 of the main story. Note that this paralogue is available only until 2/22.

Learn What Other Secrets Are Hidden After Beating DLC

As a reward, you can get Vajra-Mushti, the mysterious relic (Crest of Chevalier) Balthus used in the DLC story. Crest-bearers can use Eviscerate.

You Can Get Two Battalions

As a quest reward, you can also get two battalions; Leicester Dicers Corps and Timotheos Magi Corps.

Gather Your Allies In One Place

The initial position of your allies is quite scattered out. Try to avoid fighting alone and gather up in one place.

The Baron Ochs (boss) and two wizards aside won't move until you get close to them. Focus on defeating all other enemies including the reinforcement

The Baron Ochs will transform himself into a Beast once his HP reached zero. Surround the beast and break the shield by attacking with Gambits.