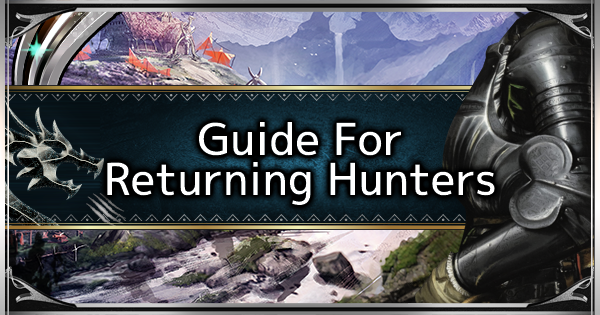 Things to Do for Returning Players

If you were playing before the release of Kulve Taroth & Lunastra, prioritize doing their quests to get some of the strongest weapons in the game. Kulve Taroth is an event siege quest so prioritize these missions whenever they appear.

Defeating Arch Tempered Elder Dragons will give you tickets to craft the γ armor which have better stats, skills, and slots. AT monsters are event quests to prioritize when they appear in the game.

Getting Endgame equipment is locked out until you get to HR 50 and above. This will require you to defeat the Tempered Kirin to remove the HR 49 cap.

Check Out How To Farm Hunter Rank Fast!

Decorations can be acquired by defeating Tempered Monsters, but an easier way to farm them is through the event quests "The Name is Lavasioth" and "The Greatest Jagras". Look out for them during the Appreciation Fest.

With the release of the Kulve Taroth Siege, a ton of new weapons were released that can be farmed from the siege quest. There are multiple variations for each weapon type!

Arch Tempered Monsters are the strongest of the monsters you will face in Monster Hunter World. With stronger damage and additional attacks, you'll need to be at your best weapon and armor wise when fighting them.

Only Available During Events

Arch Tempered Elder Dragons can only be challenged during an event where they individually appear. Since they're not always around, make sure to farm them as much as you can before they disappear.

Need to be Above HR 50 to Fight

You won't get the option to fight Arch Tempered Elder Dragons until you get to HR 50 and above. Increase your HR by doing Investigations and Event Quests available.

γ armors can only be crafted by defeating Arch Tempered Elder Dragons. AT Elder Dragon fights are extremely hard, but the armor you get from them are worth it with more skill slots than its Alpha variants.

In March 2019, the Witcher 3 collaboration will have you play as Geralt the Witcher and fight against the Leshen that invades the Ancient Forest. Witcher-inspired armor & weapons are also introduced in the game.

In December 2018, the Arch Tempered Kulve Taroth siege quest was introduced to the game. Kjarr weapons were also added, more powerful weapons than the Taroth weapons that were first introduced.

AT Monsters Appear One After The Other

In the 4th free update, the Final Fantasy XIV collaboration brings the big Behemoth into the New World. The update also included having the Drachen armor set in the game. An "Extreme" version of the quest was also added.

Check Out How To Beat Behemoth Here!

The Drachen armor set is very powerful and can provide valuable skills such as the Master's Touch. It won't hurt to have this set on standby so craft it when you can.

Can Be Crafted At Any Time

Behemoth's quest is a Special Assignment that you can repeat so it's something you can craft any time. If there are Kulve Taroth or AT quests, park this and focus on other event quests.

The first Arch Tempered Elder Dragon quest was introduced to MHW on June 2018. The quest featured the lighting monster Kirin and defeating it will grant you tickets to craft γ-tier equipment.

In MHW's 3rd free update, the Lunastra makes a comeback to defend her Teostra mate. Lunastra weapons were also added into the game, including the Temporal Mantle.

Check Out How To Beat Lunastra!

The Temporal Mantle is a new specialized tool that, when worn, automatically dodges you through dangerous monster attacks. Since it's a very crucial item in the game, be sure to prioritize getting it first.

Clear "No Remorse, No Surrender" Quest To Get Mantle

You'll need to defeat a Teostra & Lunastra in the "No Remorse, No Surrender" quest that you'll receive in Astera. A challenging feat, bring a lot of Fire resistant gear to help you survive the pair's fiery flames.

The Lunastra weapons in Monster Hunter World are especially powerful as they have high affinity rates and come with a free skill. It's very recommended to craft Lunastra weapons to help you in your hunts.

For MHW's 2nd update, the first-ever siege quest of up to 16 Hunters has been introduced and the foe is the golden goddess, Kulve Taroth. New Taroth weapons are also introduced in this update.

Deviljho Comes To The New World

In Monster Hunter World's first update, the World Eater Deviljho makes its first step into the New World. As such, new Deviljho weapons have also been added into the game.

Check Out How To Beat Deviljho!