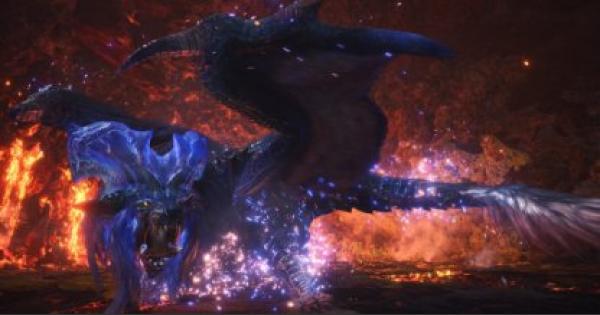 Read this Monster Hunter World: Iceborne guide on how to defeat Arch Tempered Lunastra. Learn AT Lunastra's weaknesses, recommended loadout, hunting tips, its moves and how to counter them!!!

Run Away When AT Lunastra Does Super Nova

One of AT Lunastra's most devastating attacks is her Super Nova. Much more powerful than Teostra's Super Nova, it flares twice and does heavy fire damage. Move a far distance away to keep yourself safe.

When Lunastra's Super Nova hits you, it'll deal heavy fire damage that turns your HP bar red. When this happens, automatically eat Astery Jerky to return your HP to green, keeping you safe from the 2nd flare.

Use Farcaster To Avoid Damage

If you don't have Astera Jerky or are far too close to AT Lunastra, use a Farcaster to teleport yourself back to base. This will keep you safe from all the Super Nova flares that she will blow.

In this fight, an Tempered Teostra will appear and disrupt your fight with the Lunastra. Be careful and keep your distance as they will "bond" and throw a more powerful Super Nova your way.

Use Farcaster Or Temporal Mantle To Avoid Damage

You'll get a notification to the side of your screen when the two monster have bonded. When this happens, use a Farcaster to escape the Super Nova or quickly equip your Temporal Mantle to survive the onslaught of fire damage.

The Lunastra will leave blue marks on the ground which will flare into blue fire when she flaps her wings. It's best to bring your Fireproof mantle, equip your armor & gear with Fire Resistance skills, and drink Cool Drinks to avoid taking too much fire damage.

Ammo Is Ineffective Through Blue Fire

If you're a ranged user, it's important to know that your ammo will get stopped when they hit AT Lunastra's blue blames. Re-position yourself to get a clear shot of the Arch Tempered Lunastra.

Flash Her When Low Health & Running Away

When the Arch Tempered Lunastra is limping away, she'll fly back to where she rests and will recover HP. It's best to flash her when she's flying away to bring her down again, keeping her from recovering her health.

Flash Pod Only Works 4 Times On AT Lunastra

Keep in mind that using a Flash Pod on AT Lunastra will only work 4 times in the fight. So only use Flash Pods when you want to keep her in the area or when she's already at low health.

You can hit the Lunastra for bigger damage in its 3 weak points - its head, wings, and tail. Her head and wings are breakable while her tail can be cut off.

The items recommended above are useful in surviving the onslaught of Arch Tempered Lunastra's Super Nova and her hellish blue fire & head damage.

Tail Swipe Is Longer Than Teostra's

The Arch Tempered Lunastra has a deadlier tail swipe as her tail is longer. She also leaves blue fire marks on the ground which she can ignite. Keep to her face when she does this attack or dodge through it to avoid taking damage.

The Lunastra's Fire Breath attacks have very wide range - forward and in a semi-full circle around her. When she does her fire breaths, dodge to her behind to keep yourself safe from the flames.

The AT Lunastra's Super Nova is very deadly because it pulses 2 times. It deals heat damage at the first pulse, drastically making your health red then sets her blue fire marks aflame. It's best to use Astera Jerky or a Farcaster to survive this attack.

When the Lunastra "bonds" with a present Teostra, they will do a much more powerful Super Nova attack. Keep far away from the area, use a Temporal Mantle or Farcaster, to keep safe from majority of the damage.