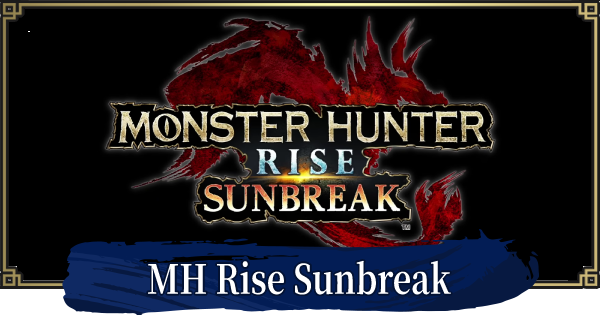 Monster Hunter Rise Sunbreak is a new expansion pack that was announced for MH Rise (MHR) for Switch & PC. This includes release dates, monsters, new features to be added, & more!

Although there's no exact release date for Monster Hunter Rise: Sunbreak, we can expect that the new DLC will be released in Summer 2022.

Release On Steam On Summer 2020

The game will also be released on Steam in Summer 2022, according to the official page; it's possible that the Steam release will correlate with the Nintendo Switch release date.

Capcom announced a new expansion pack that will be released for Nintendo Switch & PC. This includes a new storyline with more new monsters, new locales, gameplay elements, a new quest rank, and more!

Details With Sunbreak Announced On TGS 2021

More details with Rise, Sunbreak, & Stories 2 will be discussed at the September 30th TGS Event. So stay tuned for updates!

Even if the newly announced DLC will not be released any time now, we can expect that Capcom is still updating Monster Hunter Rise and there are more events to complete before playing MH Rise: Sunbreak.

Iceborne Updates May Be Adopted

▲The new monster has similarities with Velkhana

"Iceborne & Sunbreak" are both an extended content and it is possible that Iceborne's mechanics; such as Clutch Claw or Slinger Ammo may be adopted to Sunbreak.

In the trailer, the area gives a "Western" vibes to the game. It is possible that there are monsters related to western cultures in Sunbreak!

Zombies are one of the mythical creatures in western culture, so there's a chance that Vaal Hazak re-appears on Sunbreak!

Another Apex Or Rare Variant Monsters

Subspecies & other monster variants also appear in G-Rank quests, and there's a possibility that they will appear in Sunbreak.

▲Acidic Glavenus is an example of monster subspecies which is exciting to see!

There's also a pattern where existing or returning monsters have their subspecies in G-Rank. Expect that there will be subspecies of monster in Sunbreak like in Iceborne.

▲MHXX G-Rank armor have alphabets such as X, Z, XR, GX, and GXS.

Aside from Low Rank & High Rank Armor, it is also possible that there will be additional G-Rank Armor sets like in most Monster Hunter games. This new set of armors have higher stats compared to High Rank armors.

It is also announced that there will be new actions added in Sunbreak. Just like in Iceborne's Clutch Claw, it is possible that Sunbreak will add related Wirebugs actions.

▲MHXX G-Rank Quests are so hard that even expert hunters have a hard time.

Due to their increased difficulty, G-Rank quests are more appealing to speedrunners. There's a chance that G-Rank Rampage Quests will be much more difficult than the recent hub quests.

New Area Will Be Added

▲The old castle can be a new area which is similar to Castle Schrade.

There's a high chance that there will be new areas to explore, starting with the old castle in the trailer. It is also possible that this is the area where you face Elder Dragons.

New Storyline May Be Added

▲Rathalos is chasing something in the trailer.

In the first part of the trailer, Rathalos is chasing some type of Dragon-Type Energy. Then a mysterious monster appears that may luring Rathalos. It is possible that Sunbreak is a story about the monsters being controlled by a mysterious dragon.