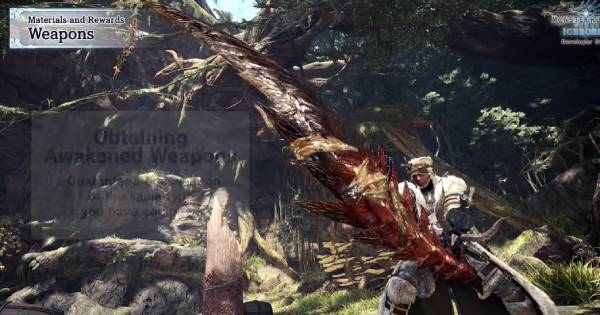 Learn about the new Awakened Weapons in Monster Hunter World: Iceborne in this guide. This includes level up, skills and abilities, how to get, and more!!!

What Are Awakened Weapons?

Awakened Weapons are unique weapons that have the ability to be awakened & gain more attributes in addition to its normal ones. These cannot be crafted & can only be obtained in the Safi'jiiva Siege Quest.

Awakened Weapons can be customized as abilities can be added, upgraded, & removed depending on your liking. If you want to make a weapon that best suits your play style, Awakened Weapons are a must have.

Check Out How to Unlock Safi'jiiva Here

There is an Awakened Weapon for every weapon type in the game with each type having multiple versions of different elements & status effects.

How To Upgrade Awakened Weapons

Use Dracolites to Level Up Weapons

Upgrade Awakened Weapons & add new abilities to them by using different kinds of Dracolites. This material can be obtained from fighting & breaking Safi'jiiva parts during the siege.

Check Out Where to Farm for Dracolites

There are 4 types of Dracolites you can use to level up your Awakened Weapons. Make sure to only use enough by using different kinds to to fill out the upgrade bar.

You will receive an option to assign an "Awakened Ability" when you upgrade your Awakened Weapons. This includes species unique set skills, such as Silver Rathalos & Teostra.

Can Add Up to 5 Awakened Skills/Abilities

Each Awakened Weapon can be equipped with up to 5 Awakened Abilities at a time. Combine & mix together abilities based on your play style & preference.

Stars determine the rank of Awakened Abilities. The higher the rank, the greater its effects. This also affects unique armor set skills.

Build Potential to Raise Chance of Getting Better Skills

You can opt to build potential instead of upgrading an Awakened Weapon immediately. Potential affects the chance of better skills showing up the next time you upgrade an Awakened weapon.

How to Get Awakened Weapons

Awakened Weapons can be earned as rewards for completing the Safi'jiiva Siege Quest, "The Red Dragon". The rewards are random so you never know which weapon type & its element you'll get.

Practice for Siege in Reconnaissance Mission

Before doing the Siege, it's a good idea to try out the Reconnaissance Mission against Safi'jiiva first. Learn its movesets and how to counter it through this mission.

Check Out the Across the Lost Path Quest Here

The weapon you used during your fight with Safi'jiiva will be available as a reward after finishing the quest. If you're aiming for an Awakened verison of a specific weapon type, use that weapon during your fight.

Stats are Fixed, Attributes are Not

Stats per each weapon type will always be fixed while its attributes and element will be random upon receiving the Awakened Weapon. Fixed stats include attack and weapon sharpness.

Counting all the elements and the abnormal status effects, each weapon type has 9 versions. However, all of these weapons have the same Attack, Sharpness, Affinity, and Jewel Slots.

Can Only Get Specific Number of Rewards

Unlike in the Kulve Taroth Siege Quest, there's a limit to how many rewards you can receive. The number of weapons you can take are limited depending on your performance in the quest..

If you're aiming for a specific Awakened Weapon type, use that weapon when battling Safi'jiiva to get it as a definite reward.

Does the Instructor's Guidance essence exist? I have seen it early on when Safi'jiva first appeared, but not I can't get the skill.

Guild pride is not available for awakenings. Spare yourself the 50 rigids to get it.