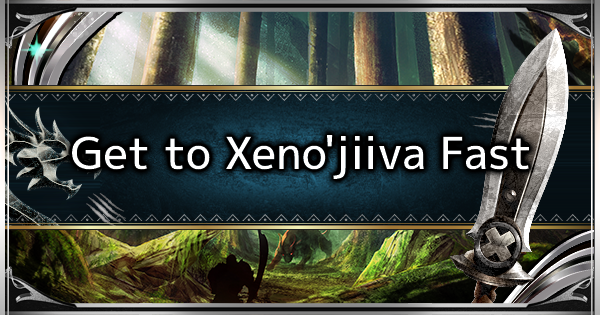 MHW: ICEBORNE
How to Get From High Rank to Xenojiiva Fast - Guide & Tips

Check out this Monster Hunter World: Iceborne guide & walkthrough to get to Xeno'jiiva fast. Including quest info, monster tips, recommended weapons, and more!!!

Your Armor Is Still Useful

Despite being doing high rank quests, the armor that you have since you defeated Zorah Magdaros should still be useful at this point in the game.

Your poison weapons can be strengthened by using the parts of the Pukei-Pukei and the Rathian you defeat while hunting. These will allow you to make your weapons more effective against the stronger monsters in the game.

After defeating the Pink Rathian, you will then be able to go to the Elder's Recess. Here you will be able to fight new monsters which you can use to create new weapons and armor. Defeat these monsters while looking for Nergigante!

Monsters in the Elder's Recess

You May Need Several Visits to the Elder's Recess

Note that since you need to collect several tracks of Nergigante to find it, you may need to head back to the Elder's Recess several times.

Where to Find Nergigante Tracks

Upgrade Your Armor To Withstand Attacks

Without the proper armor, Nergigante will be able to make you faint in 3 to 4 shots. This is why it is best to upgrade your armors in order to withstand its attacks.

Nergigante is weak against lightning type attacks which is why it is best to create or upgrade lightning weapons for the fight. Weapons that use Tobi-Kadachi parts can be very useful when facing Nergigante.

You will need to collect Elder Dragon tracks in three areas. Mainly, the Ancient Forest, Wildspire Waste, and the Rotten Vale. Each of these areas will have tracks for one of the elder dragons.

Use Flash Pods to prevent the Kushala Daora from flying up into the air, and getting off its wind attack. To add to this, you will also open up more opportunities to attack when you successfully hit it with the Flash Pod.

Use Palico Gadgets To Get More Flash

Since the Kushala Daora will force you to use lots of Flash attacks, having your Palico use the gadget "Flashfly Cage" will allow it to spawn traps to immobilize the monster!

Check Out All Palico Gadgets Here!

During your fight with Teostra, you will be in a special area with lava vents that spurts out lava at random times. Make sure to avoid these lava vents to when fighting Teostra as these do constant damage to you!

Check Out vs. Teostra Guide Here!

Watch Out For Effluvium

Among the three Elder Dragons, Vaal Hazak is one of the easiest to defeat. All you need to be careful of is the Effluvium that it expels since it can lower your health and even cut your max HP in half!

Once you've defeated all three Elder Dragons, you will then be able to face Xeno'jiiva. You should not have much problems facing this monster as long as you remember to prepare your items and strengthen your equipment!

Check Out vs. Xeno'jiiva Guide Here!

Defeating Xeno'jiiva will remove the cap on your Hunter Rank, allowing you to reach higher ranks and exclusive missions!

After Xeno'jiiva, your hunter will then be able to equip two types of mantles at the same time. They will both be usable during the quest, but each of them will have separate cool downs.

The Elder Melder will then be able to perform more powerful First Wyverian Rituals after defeating Xeno'jiiva. Keep in mind that you will still need Streamstones to perform the ritual.