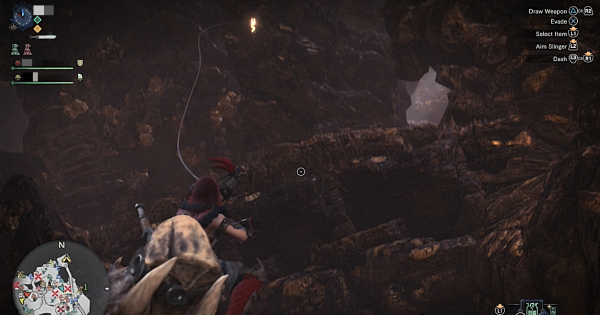 MHW: ICEBORNE
How To Use Slinger & Most Effective Slinger Ammo

Read this Monster Hunter World: Iceborne guide on how to use the Slinger. Including info on best Slinger Ammo, Slinger features, and more!!!

Features Of The Slinger

The Slinger is a unique tool in Monster Hunter World that provides various advantages in hunting. You can load pods into it to deal damage, flash monsters, and even throw status effect knives that will impede monster movement.

You can only fire Slinger Ammo when your weapons are sheathed. If you're using Sword & Shield, you can fire pods even if your weapon is unsheathed.

Only One Ammo Type Can Be Equipped

You can only equip one type of Slinger Ammo per time. Unless you unequip or you run out of Ammo, this is the limit to what you can use.

You will be able to carry more Slinger Ammo if you equip the "Slinger Capacity" skill. This increases the number of pods you can pick up when they are dropped by monsters.

Uses Of The Slinger

Use To Attack Monsters

Slingers can be used to attack monsters by equipping a type of ammo then shooting it towards a target. Depending on the type of ammo you equip, you can implement status effects, etc.

Specific Pods Are Effective Against Monsters

Certain Slinger Pods in the game are very effective against specific monsters. An Uragaan can be toppled by using a Crystalburst when it is rolling and Elder Dragon auras can be lessened by using Dragon Pods.

Can Be Used When Mounting A Monster

When you've mounted a monster, you can use Slinger Pods to attack. This deals much more damage than simple knife thrusts and makes it easier to topple the monster.

Use Slinger To Return When Knocked Off

If you have enough stamina, when the monster knocks you off during a mount, you can use the Slinger to return back to the mount. Be sure to press the button prompt to go back.

Throwing stones and other things around monsters will get their attention, so as long as you don't hit them directly. This is a great way to distract a monster when you're laying traps or bombs.

You can use the Slinger to get to higher places in Monster Hunter World by hanging onto Wedge Beetles. You can also jump this way which can lead to mounting a monster. Using the Glider Mantle will increase air time, allowing you to aim better when jumping.

You can also attach your Slinger onto Wingdrakes and use them to travel. If the Wingdrake doesn't come down, you can use Stones to bring it to the ground.

Slinger Ammo can be used to activate traps in the environment such as boulders, vine traps, etc. These are very effective in trapping monsters so make sure to utilize them a lot.

Some Ammo Is Very Effective Against Monsters

Most Slinger Ammo deal damage against monsters but some of them deal special effects on specific monsters. Make sure to know which pods work best against what monsters.

Some monsters in MHW drop Slinger Ammo when they're dealt a considerable amount of damage. These pods are unusual and very effective when used correctly.