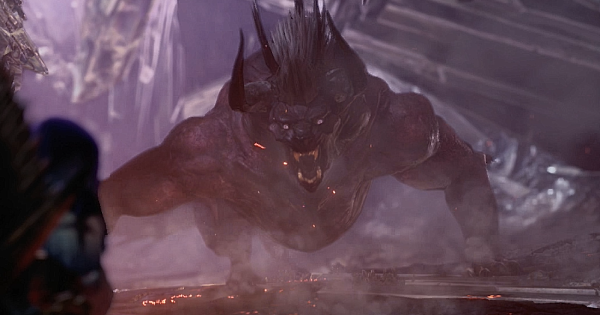 Read this Monster Hunter World: Iceborne guide on how to defeat Extreme Behemoth solo. Learn Behemoth's weaknesses, recommended loadout, hunting tips, its moves and how to counter them!!!

How Hard Is Extreme Behemoth Solo?

Whether playing multiplayer or solo, the Extreme Behemoth has a health of 51800 HP. You need to deal as much damage as you can, about 1700 per minute to be able to defeat it. This is possible while playing solo, if you don't get hit a lot or make reckless moves.

Avoid Getting Hit A Lot

If you want to clear this quest while playing solo, it's important to not get hit by the Behemoth, by any of its moves. If you get hit, you'll have to heal your health and this will take up a lot of time.

Does Not Affect Main Story

The Final Fantasy XIV Behemoth quests are completely separate from the main story of Monster Hunter World. It is a challenge of your skill as a Hunter and will not affect your progress in the game.

How To Prepare For Solo Extreme Behemoth Fight

Use Items That Increase Attack Power

Consumable items such as Mega Demondrug, Demon Powder, and Might Pill will increase your attack power during the hunt. Be sure to consume these before & during the fight to ensure your attacks will always be up.

Flash Pods Are Only Effective Twice

In the Extreme Behemoth fight, Flash Pods will only work twice and should only be used in emergency situations. Check recommended times to use the Flash Pod below.

The Extreme Behemoth does not use Charybdis in Area 3 so getting its enmity will not be useful. It's best to use Flash Pod to remove the enmity in this area.

When the Behemoth's focus is on you, the next attack will surely be targeted towards you. To cancel the Behemoth's movement, hit it with a Flash Pod.

Leave Palico At The Camp

It's best to leave your Palico behind if you want to hunt the Extreme Behemoth solo. Having a Palico will switch the monster's aggression and make it difficult for you to hit its head or face.

The best tools to use during the Extreme Behemoth fight are the Temporal Mantle & Evasion Mantle. It's best to activate your Temporal Mantle right after you gain the monster's enmity.

Make sure that the Comet that the Extreme Behemoth summons will not be broken as this is the only way you can avoid the Ecliptic Meteor, unless you've mastered the FFXIV Jump gesture.

Always Remember Where The Comet Is Placed

It's extremely important to know where the comet has dropped in this fight as the Behemoth can summon Ecliptic Meteor any time. Don't move too far away so you can quickly hide when the Ecliptic Meteor comes.

It's important to get the enmity of the Behemoth as fast as possible. Charybdis is casted pretty fast and it's important that it doesn't get casted at all. In Stages 2 and 4, it'll only take 5 Dragon Pods to get enmity so be sure to grab them from the floor.

Returning to your base camp often to replenish items will take time that you don't have in this short quest. Make sure to keep returning to camp to a minimum so you'll save time for the fight.

Area Changes According To Broken Parts

Moves To Volcanic Area When 1 Part Is Broken

Moves To Volcanic Area When 1 Or Less Parts Are Broken

If you are confident in facing the Behemoth in the volcanic area, you can stop breaking Behemoth parts when you've already broken 1 or less.

Moves To Nergigante Area When 2 Parts Are Broken

Moves To Nergigante Area When 2 Or More Parts Are Broken

When you've broken 2 or more parts of the Behemoth, it'll move into the Nerginante sleeping area in Area 15. It has a difficult terrain to maneuver so it's only recommended to go to this area if you're confident you can take the Behemoth down here.

In the first phase of the fight, be sure to lead the Behemoth underneath the falling boulders. This will deal a big amount of damage that can help you chip off the Behemoth's health early in the fight.

Hit Boulders Last During This Stage

It's recommended to hit the boulders last to overdamage the Behemoth and make it move into the 2nd phase of the fight quickly. However, be careful as you might deal too much damage and go into the 2nd phase without using the 2 boulders.

Grab Dragon Pods Before Moving To Next Area

If you deal enough damage to the Behemoth in the 1st phase, it'll drop Dragon Pods. Make sure to pick them up and put them in your Slinger as these can help you gain enmity quickly during the 2nd phase.

With the Dragon Pods you've picked up, make sure to gain the Behemoth's enmity. This prevents it from casting Charybdis during this phase.

In Area 12, there are no distinct landscape features that will hinder your fight, making it easier to face the Extreme Behemoth in this phase.

Area 14 has slopes and crystal towers, making it a challenge to fight the Extreme Behemoth. However, unlike Area 12, you won't need a Cool Drink to protect yourself from the heated environment.

Grab Dragon Pods Before Moving To Next Area

If you deal enough damage to the Behemoth in the 3rd phase, it'll drop Dragon Pods again. Make sure to pick them up and put them in your Slinger as these can help you gain enmity quickly during the 4th phase.

Area 13 has magma cracks that can blow you into the air when they erupt. If you are hit, the damage is big and you're vulnerable to any of Behemoth's attacks. When you see the crack about to erupt, steer clear of it.

In Area 15, there are not many environmental hazards except for the falling stalactites when you fight the Behemoth near the entrance to the area. This area is challening as the space is small and you don't have enough room to run.

In the 4th phase of the fight, the Extreme Behemoth will be very aggressive so it's best to pace your attacks. In this stage, survival is more important so watch the monster's movements carefully.

Its a lie he never has 51k hp. Maybe for each phase ye.

Well extreme behemoth has WAY more health than I thought

Thanks for the tips.