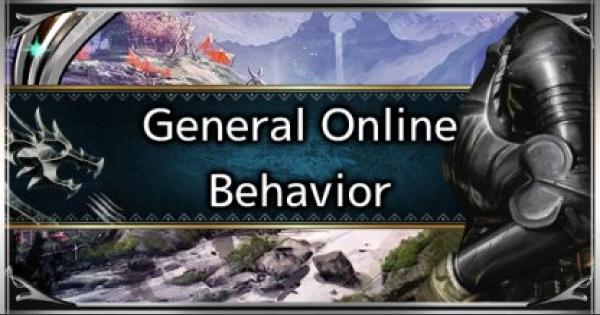 Check out this Monster Hunter World Guide and learn about general etiquette and behavior when playing with other players online! Learn how to behave correctly when interacting with the online community!!!

Check Out The Beginner's Guide Here!

Greet Players In The Session

Swearing while playing is not just limited to when playing Monster Hunter World. When directed to other players, it can have a negative effect to their experience while playing so avoid it as much as possible so everyone can enjoy.

Do The Quests Of The Squad Leader

When in a squad with other players, you should do the quests that the Squad Leader posts. If you want to post your own quest, ask the Leader first, then post after they have allowed it.

Always Contribute To The Fight

After defeating a monster, everyone in the party will be able to carve it for parts. Always make sure to help out in fights in order for you to earn those monster parts as a reward! In other words, don't freeload!

Communication is an important aspect when it comes to hunting monsters. Let your team know what's happening around you via text or voice chat to keep them up-to-date with information while hunting!

Set Your Mic to Push-To-Talk

Make sure to set your microphone to Push-To-Talk in the menu. Having a mic that is always on, will record all the sounds near you, and may annoy some players.

How To Behave When On A Quest

Avoid Knocking Down Teammates On Purpose

All weapons in Monster Hunter World can hit your teammates if they're in the way. Despite not doing any damage, it can detriment the team if someone keeps knocking others down. Make sure to keep a safe distance from teammates when in fights!

In certain quests there may be supply items given to you. These will help greatly when finishing the quest. However, some party members may not be able to get supply items if you hoard them all. Remember that sharing is caring!

Be Kind To Inexperienced Players

At times, you may not be able to finish a quest because one member has fainted. If this happens, keep a cool head and avoid griefing said player. Instead help them learn from their mistakes and try again.

Use Items For The Team

There are items that you can use that will benefit the whole team. Items such as the Life Powder will heal all of your allies for a certain percentage. Keep an eye on your team's health and use these items to support them!

There may be times when playing that you will encounter rude or indecent players. Pay no attention to them as getting involved with them may only spell trouble for you!

Block Them If Necessary

There is a mute feature in Monster Hunter World which allows you to mute a certain player's voice chat. You can also choose to manually accept players who want to join your quest in order to block that certain player from hunting with you!