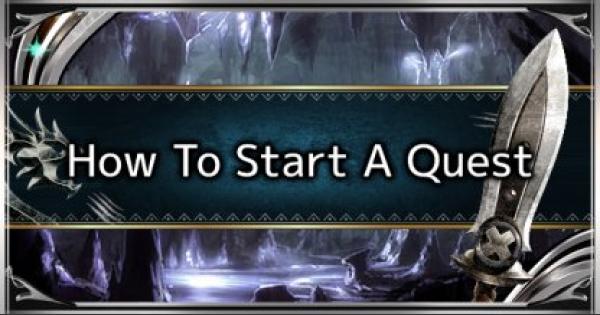 MHW: ICEBORNE
How To Start And Join Quest

Check this Monster Hunter World: Iceborne guide on how start an post quests, both in single / solo play & multiplayer!!!

How To Hunt Monsters Here!

How To Start A Solo / Single Player Quest

Optional: Start The Game As A Private Session

If you prefer to play Monster Hunter World alone, you can turn your game into a private session by turning this option to YES, when creating an online session. This is an optional step, and you can still start a solo quest however you start your session.

Only Players You Invite Can Join

In a private session, only players you invite, whether via a direct invite on the platform, or through the online session ID, can join your session.

Select A Quest From The Quest Board Or Handler

Whether playing solo or multiplayer, the starting procedure is the same. Head over to the Quest Board or the handler, and select "Post a New Quest", and then select a quest you'd like to take on.

Optional: Set The Number Of Players

When you select a quest, you'll be asked to set the number of players and the passcode for the quest. If you wish to complete a quest solo, set this to just "1", however, with the previous mentioned tips, you may not need to change this.

Important: Setting Players to 1 Will Prohibit Use of SOS

Setting this option to 1 will not allow you to use the SOS tool, which will allow players to join in your game when you ask for help.

Once Confirmed, Quest Will Load

Once the quest is confirmed, the quest will load and you can prepare for the quest. Make your necessary preparations and depart for the quest once loading is complete.

How To Start A Multiplayer Quest

Join Or Create An Online Session

To play with friends or with other random Hunters, you must first create or join an online session. This can be done at the start up screen, or on the menu.

Matchmake Will Team You Up With Other Hunters

The Matchmake system will allow you to join other online players based on your matchmaking preferences, such as Quest & Hunter Rank preference & more. You'll be matched with players with the same set of preferences.

Create An Online Session Will Make You A Host

When you select the Create an Online Session Option, you'll be set as a host, and other players can join in your session. Just set your Private Session setting to "No", to allow players to join you.

Play With Squad in Create / Search for Squad Session

Selecting the third option will allow you to search or create game sessions that will team you up with members of your squad.

Post Or Join A Quest To Start A Mission

Once in the game session, head on over to the quest board to post or join a quest. When posting a quest, you have the choice which quest to take on. Joining a quest will make you join a quest started by another player in your session.

Set Number Of Players to 2 or More

Make sure to set the number of players to more than 1. This will allow other players in the session and invited players to join your quest.

Set A Passcode For Private Quests

Should you need to start a quest with only specific players, you may want to set a passcode. Players who want to join your quest will be required a passcode to join, and only those who know the passcode can join.

Make sure to make necessary preparations, such as equipping the right items & loadout for the quest you're taking on. Make sure to purchase a meal from the canteen as well!

All Players Should Confirm & Standby For Departure

Once preparations are made, all players in the party must confirm and standby for departure by pressing the touchpad, or heading out of Astera. Once everybody confirms, the party leader will be prompted to depart for the quest.

Ongoing Quests Can Still Be Participated In

Once the quest has started, other players can still join in as long the maximum number of allowed players has not been met yet. Other players in the session can simply join your posted quest on the quest board.

Call In Other Players Via SOS

Fire off an SOS Flare to get help from hunters around the globe during hunts. #MHWorld https://t.co/JdmffGH1ix pic.twitter.com/tPDoq9B44W

Once already in the quest and you still have room for other players, you can call in help using the SOS tool from the menu.

You can also join other player's quests who called in help via SOS. Simply head to the quest board, and select respond to SOS. Search quests by applying your desired filters to give you a list of ongoing quests you can join in.

Things To Consider For Multiplayer

In order to get the best multiplayer experience as possible in Monster Hunter World, a broadband internet connectivity is recommended. However, it's best to have at least NAT Type 1 (Open) or 2 (Moderate) to be able to play with other players.

With a NAT Type 3 (Strict) connection, connecting to multiplayer sessions will not be as easy. Check with your Internet Service provider on how to change this.

On console, you will need a PS Plus or Xbox Live subscription to be able to play with other players. You will still be able to access special event quests, but all multiplayer related functions, including SOS, matchmaking and others will not be allowed.

No Subscription Needed for PC Players

No subscription is needed if playing on PC, and all multiplayer functions will be available for PC players off the bat.

After 10 Minutes, Rewards Are Reduced

Your potential quest rewards will be reduced after a quest you are trying to join has already past 10 minutes.