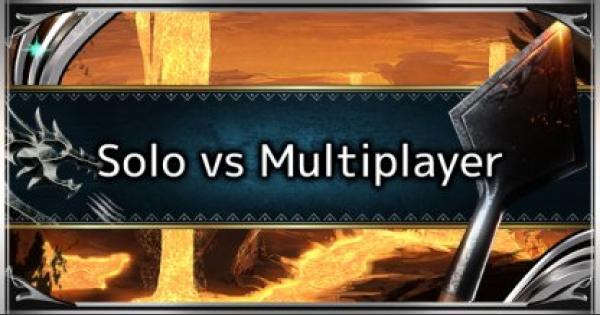 Check out this Monster Hunter World: Iceborne guide and tips on the advantage and difference between solo & multiplayer (coop) in the game!!!

The game becomes more difficult when playing in multiplayer. This is because of the increase in strength and HP of a monster when fighting against more than 2 Hunters. It's best to bring your strongest weapons & skills to take monsters down in multiplayer.

You Can Move Without Thinking Of Others

In solo mode, you and your Palico will be the only ones fighting monsters. The monster HP will be at normal levels and you don't have to worry about the monster changing its actions when fighting you.

When playing in solo mode, it's easier to control monster aggression. The monster will be focused only on you or your Palico, making it easier to plan your moves without other Hunters possibly grabbing the monsters attention.

Challenge and Arena Quests are set on multiplayer mode, meaning that the HP & strength of the monster has been increased. This makes it disadvantageous for solo players, making it difficult to defeat the monster and taking longer to bring them down.

Not Recommended In Special Siege Quests

The special Kulve Taroth Siege quest is formatted for multiplayer mode. Reward drops are the same as multiplayer and playing this quest solo will be inefficient. It'll take longer to defeat the monster or complete objectives on solo mode.

Hunting With 4 Players Can Save Time

Though there is an increase in monster HP and strength, hunting with 4 people can be very quick. Well-equipped Hunters can deal more damage plus there will be an abundance of recovery items that can help you survive longer in battle.

Some Hunters Are Inefficient When In Multiplayer

Some Hunters can become very inefficient in multiplayer mode, making the others carry their weight in damaging the monster. It's best to communicate with your party and coordinate attacks and recovery to make the hunt more efficient and effective.