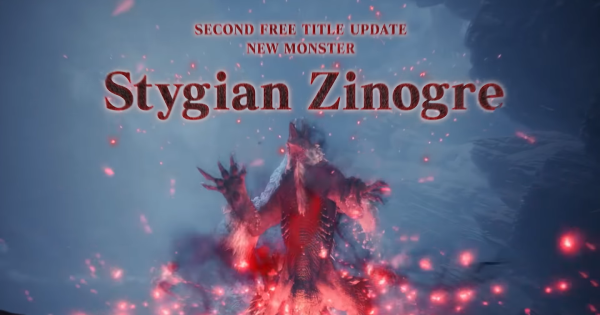 Check Out The Latest Iceborne News!

In a recent Tweet from Monster Hunter's official Twitter, a 4th Developer Diary will be released on December 4, 2019. The assumption is that it will focus on the 2nd Free Title Update with new monsters such as the Stygian Zinogre!

The Stygian Zinogre is a Dragon element subspecies of the Thunder Fanged Wyvern Zinogre. In a recent teaser video, it's been announced that it'll head to Iceborne on December 5, 2019 as part of the 2nd Free Title Update!

Check Out How To Unlock Stygian Zinogre!

Stygian Zinogre opens the gates to a plethora of new content on Dec 5th. #Iceborne pic.twitter.com/RA4tP1zfs6

A new black Elder Dragon has also been teased in Monster Hunter's official social media accounts. Though nothing has been confirmed, the Elder Dragon looks like it's in somewhere resembling Rotten Vale & surrounded by Scoutflies.

At the same time as the Stygian Zinogre and new Elder Dragon were teased on Twitter, Monster Hunter also posted a photo of a new seasonal event for Iceborne. It looks like a celebration of the Lunar New Year!

Coming in the 2nd Free Title Update, new players of Monster Hunter World will be able to forge the Defender Weapons, 14 weapons that can be used and upgraded until Master Rank 1!

Currently available in the game, the Guardian α+ Armor Set can be retrieved by new players who have yet to finish Monster Hunter World. This will give players a big help in defending against tough monsters.