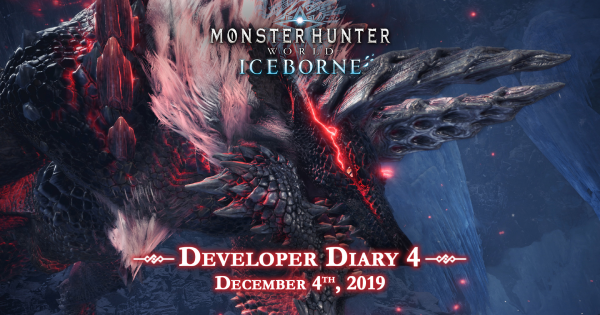 Confirmed with more details in the Developer Diary 4, the Dragon elemental wolf monster Stygian Zinogre is howling it up in the freezing zones of the Tundra Region in the Guiding Lands.

Check Out How To Beat Stygian Zinogre!

Once you reach Master Rank, you'll need to speak with specific NPCs in Seliana to get the Special Assignment to face off with the Stygian Zinogre.

Check Out How To Unlock Stygian Zinogre!

The new Stygian Zin armor set will have Latent Power as a set bonus. The set will have different armor skills from that of the regular Zinogre, making it interesting to mix & match armor for the best loadout.

The complete opposite of the previous update, the Tundra Region will bring freezing areas into the Guiding Lands. Be sure to prep a lot of Hot Drinks when you fight in this territory!

The developers confirmed that new materials will be available in the Tundra Region for better options in Master Rank weapon augmentation, allowing Hunters to create more powerful loadouts!

Check Out How To Augment Master Rank Weapons!

The tempered version of the Ruiner Nergigante has also been announced for the 2nd Free Title Update. Hunters need to reach a certain Master Rank first before they're able to face this powerful Elder Dragon eater!

Check Out How To Beat Tempered Ruiner Nergigante!

Check out How to Unlock Tempered Ruiner Nergigante

The 2nd quest for the Horizon Zero Dawn: The Frozen Wilds collaboration called "The Survivor" will be launched on December 13, 2019! Fight against the Stygian Zinogre to get crafting materials for unique equipment!

Get an upgrade on your Aloy full armor with the Shield-Weaver+ set. You'll be able to traverse the world of Iceborne as Aloy, the protagonist of Horizon Zero Dawn.

Players who favor the Light Bowgun will be able to enjoy the upgrade of the Stormslinger Prototype into the Adept Stormslinger, making it more powerful than ever!

You'll also be able to create a full Palico weapon & armor set called the Forgefire α+ and Frostclaw α+ to complete that Frozen Wilds look for your partner!

In the 3rd collab quest, "Firebreak", which will be launched December 27, 2019, Hunters will have to face a Savage Deviljho to get crafting materials for unique weapons & armor!

A new armor set can be crafted from the materials of the 3rd collab quest - the Banuk α+ armor! This armor is worn by Banuk tribe members from the Horizon Zero Dawn game!

New colors for the previously available Focus pendant from the 1st collab quest will be added. These are craftable from materials in the 3rd collab quest.

You'll also be able to upgrade the Palico Watcher armor set into Master Rank, making it possible for you to have this equipment for your Palicoes during Master Rank hunts!

Aloy's Bow from the first Horizon Zero Dawn collab will also be upgradeable in the 3rd Frozen Wilds collab quest!

In the 2nd Free Title Update, Hunters will be able to craft layered armor from the High Rank armor list! This makes mixing & matching your personal look much more fun!

Developers have also mentioned that they are including the Gamma armor of some sets to be layered armor for the 2nd Monster Hunter World anniversary coming this January 2020!

Though not confirmed, it's possible that Iceborne layered armor will be coming to the game as well. However, no details have been announced.

Addressing the issue of lowering Region Levels in the Guiding Lands, after the update, Hunters can now manually decrease their Region Levels!

Hunters will now have an easier time to get special tracks and will also receive the same analysis & special tracks in the expedition they're on, when on multiplayer!

To make new players have an easier time in Monster Hunter World and Iceborne, new Defender weapons have been introduced into the game. These are 14 weapons that you can craft early on & upgrade until Master Rank 1!

The Guardian armor set and the Defender weapons were introduced to help beginner players go through the base Monster Hunter World story at a faster pace, allowing them to get to Iceborne quicker.

Check Out How To Complete Story Fast!

The first seasonal event for Iceborne will arrive on Dec. 20, 2019, and it's called the Holiday Joy Fest! It'll be available for both Seliana & Astera headquarters.

Participating in the Holiday Joy Fest seasonal event will reward you with special materials to craft unique armor and equipment such as the one shown above.

Includes Armor For Palico Too

The Holiday Joy Fest will also feature new Palico armor that you can craft from materials in the event quests!

The Holiday Joy Fest seasonal event will also have several gestures and costumes for sale, aside from those you can craft from the event's quests.

On January 24, 2020, Monster Hunter World will celebrate its 2nd anniversary with the Grand Appreciation Fest seasonal event! Participate to get tons of skins and bonuses.

Hunters who participate in the Grand Appreciation Fest will get tons of aesthetic bonuses. Completing the event quests successfully will grant crafting materials to create unique out-of-this-world armor.

Make Your Palico An Alien

You can also craft Palico armor that resembles aliens from outer space! Make sure to complete the event quests to get tickets to craft this Palico armor!

In the 2nd Free Title Update, Hunters can purchase a new room decor set that is reminiscent of historic Japanese houses, including wooden floors and shoji doors!

Asian Hairstyles For Your Hunter

If you're feeling the total Asian vibe from the recent updates, Monster Hunter World will also offer Asian-inspired hairstyles for purchase that can amp up your Hunter's persona!

When you have several people in your room, there will be a new feature that allows Hunters to only see the chat of those inside that room!