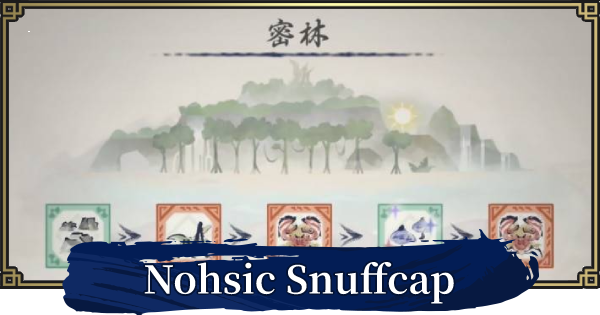 Sunbreak | Monster Hunter Rise
Nohsic Snuffcap - How To Get & Uses

Nohsic Snuffcap - How To Get & Uses in Monster Hunter Rise Sunbreak (MHR Sunbreak). Includes best farming routes, locations, how to get & use, and more!

Obtained In Jungle (MR) Via Meowcenaries

Increase The Chance To Obtain

Use The Arena To Pass The Time

Arena Quest 06 as it has a strict fail condition with only 1 faint. Deliberately fail the quest to pass the time and produce the Talismans.

Talismans are generated after the completion of a quest, regardless if you succeed or fail. So, take advantage of the Arena 06, in which Rajang appears, since this is efficient as it can be failed faster.

With the progression of the Meowcenaries, the map & rewards reset by completing some quests. If the reward list you're looking for isn't on the Jungle , intentionally fail the arena so mushroom (rare) would appear.