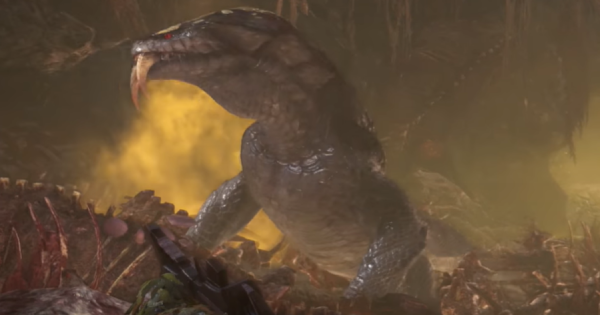 Read this Monster Hunter World: Iceborne guide on how to defeat Great Girros. Learn Great Girros's weaknesses, recommended loadout, hunting tips, its moves and how to counter them!!!

The Great Girros will occasionally summon other Girros into the fight. Breaking its head will lessen these calls and make its bites less frequent, allowing you to focus on the bigger monster.

Watch For Its Paralysis Bites

When the Great Girros bites you several times, it can inflict Paralysis. Make sure to avoid its bites by dodging to the side and away from its head.

The Great Girros is a relatively easy monster to hunt and only has a few moves in its move set. This makes it a great target for hunters who want to practice a new weapon or combo.

Great Girros's main weak spots are its head, forelegs, and tail. Its tail can be severed.

The purpose of having Flash Pods and Pitfall Traps in your Item Pouch is to keep the Great Girros in a single location for longer periods of time. This will greatly help you break its parts, giving you the advantage in the fight.

The Great Girros will raise its head and do a series of calls that will summon several Girros into the fight. Break its head to lessen the effectivity of the Great Girros's calls.

Does Series Of Bites That Can Paralyze

This monster mostly attacks with different kinds of bites. Being bitten several times can decrease your Paralysis resistance, inflicting you with the status effect. Keep away from the Great Girros's face to avoid getting bitten.

The Great Girros also spews a ball that can paralyze you when you get hit. Simply roll away to avoid taking damage or getting the status effect.