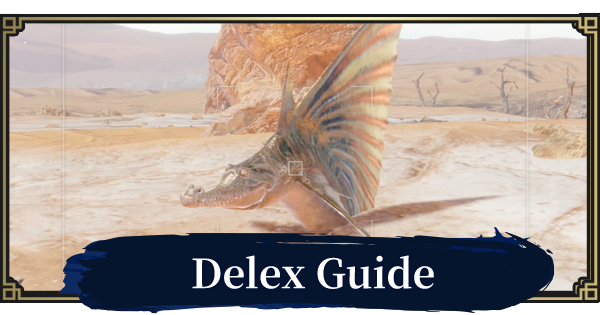 Delex is a monster opponent in Monster Hunter Rise (Switch). Guide includes where to find Delex, spawn location, how to attack, and how to get items & materials in MH Rise!!

Increased Appearance During An Outbreak

The best time to farm Delex items is when there is an Outbreak of Delex, when Delex will apear around 1.5x more than usual. This info can be found on the "Locale Info" section of the Expedition Tour. Always check the Locale Info to maximize opportunities like these.

Delex - How To Attack

Draw Out With Sonic Or Flash Bombs

Delex can usually be drawn out by dealing damage on them, but if you find you have a hard time landing hits, try using a Sonic Bomb or Flash Bomb to force the Delex out of the sand. Note that Flash Bombs won't work unless you throw them directly at Delex's head.

How To Craft Sonic & Flash Bombs

Try Attacking While On A Palamute

If you neither have a Sonic Bomb nor a Flash Bomb, you can also try attacking Delex while riding your Palamute so you can chase it as it moves. If even just one direct blow is given, Delex will stop moving to attack you.