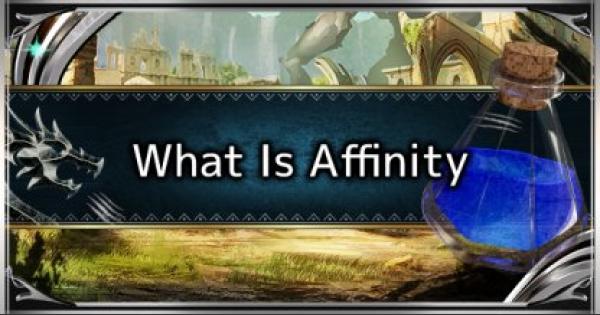 MHW: ICEBORNE
What Is Affinity (Crit Chance) - How To Boost Affinity Stat

A weapon's affinity stat is basically its critical chance. This determines the probability of your weapon doing critical hits to a monster, creating more damage to bring it down.

When your weapon's affinity rate is positive, this can increase your weapon's offensive power. A higher affinity stat means a higher chance of your weapon doing critical hits. This applies to raw physical damage and does not affect your elemental damage.

A negative affinity rate not only lowers your chances of critical hits but it also adds a damage penalty to your weapon's attack power. This lowers your weapon's DPS, making it harder for you to deal heavy damage to a monster.

No Special Change When Affinity Is 100%

If your affinity rate is at 100%, this means you'll do critical hits with every single attack. However, there is no known effect for weapon affinity stats that go above 100% so it's best to keep your affinity at 100% when building your weapons & gear.

How To Raise Your Affinity Stat

The Most Effective In All Crit Boosting Skills

This skill not only increases your attack power but at Level 4, it increases your affinity rate at 5%. Take note, though, that this percentage does not increase further even if you have a higher level of Attack Boost.

The Most Simple Way To Increase Affinity

Using Critical Eye is one of the most basic ways to increase your affinity. This can be leveled up to 7 and the max percentage of affinity increase is 30%.

Perfect For Weapons That Don't Use Stamina

This skill increases your affinity stat when your stamina is full. It is a very effective skill to have for Hunters who prefer using weapons that don't consume stamina.

Powerful Skill But Hard To Activate

This skill activates only when you've been fighting a monster for more than 5 minutes or have taken enough damage. However, this lasts for 90 seconds and also decreases the rate of your stamina consumption.

When a monster is enraged, this skill activates and increases your affinity stat & attack power. Since monsters are enraged several times in battle & sometimes have weaker defense when enraged, this is a useful skill to have.

This skill increases the percentage of your affinity at your first draw attack. Using this skill requires special techniques and equipment such as great swords and bow to be effective.

This skill increases your affinity stat after you slide down a slope. The effect will last 15 seconds and requires a slope to activate. Since there are not many slopes in several areas, it's not a very effective skill to equip.

Lay Down The Affinity Booster

Using the Affinity Booster in the field will increase your affinity rate, as long as you stay within the smoke's vicinity. It is highly recommended to use for Hunters that are looking to increase their affinity in the midst of battle.

In Monster Hunter World, you can augment your equipment to increase specific stats and affinity rate is one of them. To augment your gear with more affinity, you'll need to go to the Workshop & have the necessary materials.

How Effective Is Critical Boost Skill

The Critical Boost skill increases the damage dealt by your critical hits. Instead of the normal 125% damage, it'll be increased to 130% and more, depending on the skill's level.

Valuable Skill When Raised To Level 3

There isn't a significant change from 125% increase to 130% or 140%. However, if your affinity rate is high and you're able to land more critical hits, then this skill becomes very powerful & highly recommended at Level 3.