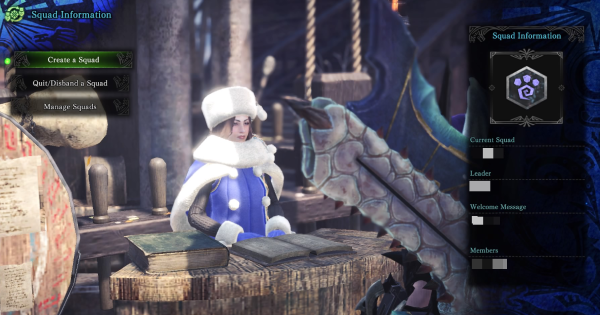 MHW: ICEBORNE
What Is A Squad - Guide & Benefits

Send Squad Cards To Other Hunters

In Iceborne, Squad Cards will be implemented where Squad Leaders can invited other Hunters by sending these cards to them - acting much like Hunter Guild Cards/

Only Leaders Can Send Squad Cards

Can Join Squads Even If Not In Same Session

Once you receive a Squad Card invite, you can join the Squad even if you're not in the same online session as the one who sent it to you. You can check which invites you have to compare which Squads you want to join.

Benefits Of Joining A Squad

Use Online Sessions Specifically For Members

One of the main benefits of being part of a Squad is you can be part of a private online session that is only available to Squad members. This makes hunts more cooperative & efficient.

Use Squad Member Only Chat

Since you're in a private online session with fellow Squad mates, your chat will be exclusive between members. This will greatly benefit coordination of posting quests, hunting monsters, etc.

How To Create A Squad

To create a Squad, simply talk to the Event Manager behind the Squad Counter. You can choose your Squad's emblem, color, and greetings.

How To Join A Squad

Going up to the Gathering Hub and talking to the Event Manager at the Squad Counter will also help you find a Squad to join. Just talk to her when you receive a Squad invite.

What Is A Squad?

Squads are Monster Hunter World's in-game way of building communities between Hunters. By being part of a Squad, you'll find several Hunters that have the same goals as you.

Hunters Can Join Up To 8 Squads

Hunters are free to join different Squads until they reach a maximum number of 8. This way, you can separate your communities according to what you want to do in the game.

One Squad Can Hold 50 Hunters

A MHW Squad can hold up to 50 Hunters at a time, making it a unique experience to be part of a Squad in this game.