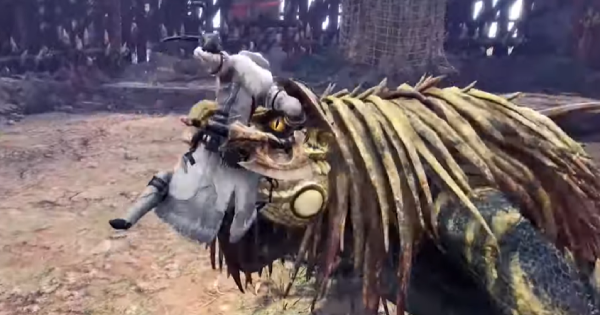 Read this Monster Hunter World: Iceborne guide to know more about the new Clutch Claw & Slinger action - Slinger Burst. Know what it does and how to perform a Slinger Burst here!!!

What is Slinger Burst (Flinch Shot)?

Latch On To Monster & Fire All Slinger Rounds

Slinger Burst is a move in Iceborn that you can perform when you latch onto the monster's head with the clutch claw. You will fire all remaining slinger ammo on monster's head and change it's position.

Drive The Monster's head Into Obstacle For Greater Damage

Conditions For A Slinger Burst

To perform a Slinger Burst, you must have loaded the slinger with ammo, and also the monster must not be enraged.

Strike With Weapons If No Obstacle Is Around

You won't deal too much damage if you don't drive the monster's head into an obstacle. If none is nearby, you can deal more damage by attacking it with your weapon by pressing △ button.

How To Perform A Slinger Burst (Flinch Shot)

1. Load The Slinger Ammo You Want To Use

Can Only Use Slinger Ammo Found in Hunt

Flash Pods and other pods cannot be used for the Slinger Burst. It has to be ammo found within the hunt like the ones dropped by monsters or other lootable sources.

2. Latch on To The Monster's Head With Claw

How To Check If The Monster is Enraged

Check your minimap. If the monster's eye icon appears to be red, it is enraged. Only do a Slinger Burst when the eye icon is yellow.

3. Drive The Monster's Head Into An Obstacle

If you see a monster drooling and staying in place, it's an opening to do the Clutch Claw. Exhausted monsters are less likely to thrash around.

Steer when Attached to Head

Players will only be able to steer monsters when they attack the head. You won't be able to do this if you attach to any other part of the monster.

Can Only be Done 3 Times Before Enraged

The monster's rage meter accumulates as you do a claw latch. On average, it will take 3 clutch claws before a monster becomes enraged. A claw latch will be ended immediately if the monster enters a rage.

4. Unleash All Your Ammo With Slinger Burst

Press the R2 button to fire all your slinger ammo and greatly change the position of the monster. You can aim for a head crash if the distance between the obstacle is around x1.5 ~ 2 of the monster's torso size.

Find out what you can do with Clutch Claw Here!
ユーザー登録のご案内