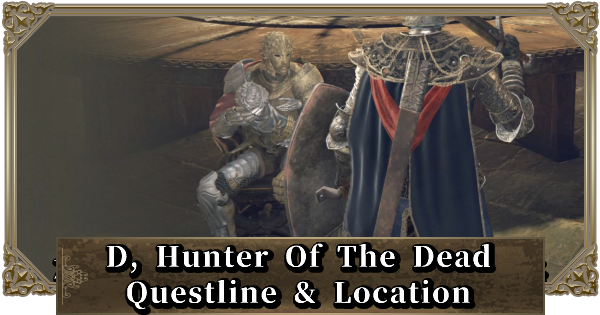 Appears Near Summonwater Village In Limgrave

Burning The Erdtree Locks The Questline

Burning the Erdtree in the "Forge of the Giants" at the Site of Grace in Mountaintops of the Giants will kill D. The Questline will be skipped to the progress after D's death, so you will not be stuck, but you will miss the conversation Questline while D is still alive.

※Questline is somewhat involved in the ending, so if you don't want to be spoiled, we recommend you play it first.

From The Start Of D's Quest Until His Death

With the "Deathroot" in hand, talk to D, show him the "Deathroot" and ask him to introduce you to Gurranq. However, the location of D's appearance changes depending on whether or not Roundtable Hold is accessible or not.

Defeating Tibia Mariner Is The Quickest Way To Obtain Deathroot

At the beginning of the game, Deathroot can be obtained by defeating the boss "Tibia Mariner" in Summonwater Village, north of Limgrave. It is a weak boss that can be defeated with initial equipment if you work hard enough, so it is fairly easy to obtain."

After the conversation with D, the location of the Portal (Gateway) will be marked on the map, so use to warp to the location where Gurranq is. After warping, open the door in front of you to enter the building and talk with Gurranq to obtain items. If you get "Deathroot" in the future, give it to Gurranq and he will exchange it for an item.

Next, go talk to Fia at Roundtable Hold. After arriving at Altus Plateau, try to talk to Fia several times and you will be presented with the option of "May I ask a favor?" If you choose yes, you will be given a "Weathered Dagger".

Baldachin's Blessing Should Be Used After Being Held

If you are hugged by Fia, you will receive "Baldachin's Blessing", but while you have it, you will have a debuff that reduces your maximum HP. It is recommended to use it and consume it.

After receiving the "Weathered Dagger" from Fia, talk to D and give him the Dagger.

After handing over the Dagger, try to refresh the area in the Roundtable Hold by warping in the Site of Grace. Then D will be gone, so proceed to Roundtable Hold, referring to the location in the video above. After you have proceeded, D will be dead and Fia will be gone.

Twinned Series Can Be Obtained From D's Body

You can pick up the "Twinned Series" armor from D's body. Be sure to pick it up and keep it, as you will need it later in your Questline progression.

From D's Death Until The End Of The Quest

▲How to get to Nokron from above

From here, you will pass through the underground area "Nokron, Eternal City", which you will be able to pass through only after defeating the area boss Radahn in Caelid. If you haven't reached this area yet, proceed with this questline first.

If The Radahn Festival Does Not Start, Try The Following

When you proceed through Siofra Aqueduct, you will find D's brother nodding off in front of the boss area. If you have the Twinned series in your possession go talk to D's Twin Brother and you will have the option to give the armor to him, which will be a key to proceed to Questline.

If you forgot to pick up the Twinned series when D died, return to the Roundtable Hold to get it.

Armor Cannot Be Given If Altered

Note that if you have adjusted the outfit in Tailoring Tools and changed it to a light outfit, you will not be able to give the Twinned series to D's twin brother. You can revert the altered armor in any Site Of Grace by using Runes.

After giving the Twinned series to D's brother, follow the path to the boss battle. After defeating the boss, rest at the nearby Site of Grace and go to the back of the waterfall to find a sarcophagus, which you can examine to warp to the next area.

▲Route from the start to the boss area

Once you warp into the Deeproot Depths, go deeper and deeper until you reach the boss area. Since the route in this area is complicated, you can refer to the video above as you proceed.

When you advance to the boss area in the back, a series of boss battles will begin. Defeat the boss and you will get the sorcery "Fia's Mist". Talk to Fia and choose "No, I want to be held" to proceed through the questline.

After selecting "No, I want to be held," Fia will remark, "We must look for another existing mark." This refers to the Cursemark of Death, which can be obtained by clearing the Divine Tower of Liurnia at the end of the Carian Study Hall in Liurnia and heading to the top floor.

▲Route from the first Site of Grace to the Hidden Treasure

Once you have obtained the Cursemark of Death, head back to Across the Roots and give it to Fia. To fast travel underground, open the map and press R3 (right stick pressed). You will be given the Radiant Baldachin's Blessing after the conversation that follows.

Click to Enlarge
If you talk to her long enough, she will eventually say, "This is goodbye, my dear." Rest at the Site of Grace after she says those words.

You'll find Fia sleeping in the same spot after resting at a Site of Grace. If you approach Fia while she is sleeping, you will be given the option to touch her, and if you select 'yes,' a battle with the Lichdragon Fortissax boss will begin.

After defeating Lichdragon Fortissax, return to Fia and obtain the Mending Rune Of The Death-Prince.

You Get A Slightly Distinctive Ending

After defeating the final boss, the player can use the Mending Rune of the Death-Prince to Restore the Elden Ring by touching the broken Marika with the rune in their possession. The trophy (achievement) is the same as the normal ending, but the content is slightly different, so go restore the Elden Ring before resting at a Site of Grace if you want to see it.

After obtaining the "Mending Rune of the Death-Prince," take a break at the Site of Grace. After the break, look at the place where Fia is and you will see D's brother appears and Fia is killed. From Fia's corpse, you can pick up the "Fia's Armor" set.

Then, after talking to D's brother, you can either rest again at the Site of Grace or kill D's brother to get D's equipment. Not only the "Twinned Series" armor that you temporarily got during Questline, but also the Inseparable Sword weapon.

How To Kill D's Twin Brother

D's Brother Becomes Hostile If D Is Killed By The Player

D Can Be Killed Before Accessing Roundtable Hold

D cannot be killed when in Roundtable Hold. Therefore, the only way to kill D is to go to the Summonwater Village area in Limgrave before coming to Roundtable Hold (before accessing Roundtable Hold) and kill D at this time.