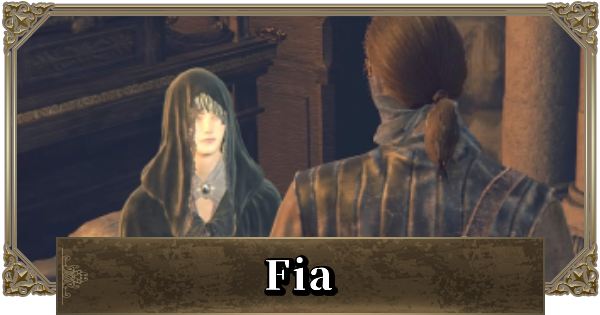 Burning The Erdtree Skips Some Dialogue

If the Erdtree is burned in the Forge of the Giants (a Site of Grace in the Mountaintops of the Giants), D will die and you can see his body at the Roundtable Hold. Fia's questline will also advance to the events following D's death. Her questline will not be locked out, but you will miss some of Fia's dialogues from when D was still alive.

※Since this questline is somewhat connected to the ending, we advise those who do not want to be spoiled to play it first.

From The Beginning To D's Death

While you have the Deathroot in your inventory, talk to D. Show him the Deathroot and ask him to introduce you to Gurranq. Note that D's location changes depending on whether or not you have unlocked the Roundtable Hold.

Quickest Way To Obtain Deathroot Is By Defeating Tibia Mariner

If you are in the early stages of the game, you can get the Deathroot by defeating the Tibia Mariner boss in Summonwater Village north of Limgrave. The boss is so weak that it can be defeated with initial equipment if you try hard enough, making it quite easy to obtain.

Go speak with Fia at Roundtable Hold. If you talk to her, she will ask to embrace you. However, if you have gone to Altus Plateau, an option 'May I ask a favor?' will appear after talking to her several times. If you choose it, she will give you the Weathered Dagger.

When Fia embraces you, you will receive the Baldachin's Blessing. However, you will also receive a debuff that reduces your Maximum HP while you have it. The item is not required to progress the questline, and if you need the item, you can acquire it again by simply embracing her. Therefore, it is recommended to use and consume the item immediately.

After receiving the Weathered Dagger from Fia, speak to D sitting near the initial position of the Roundtable Hold and give him the dagger.

After giving the dagger, examine the center of the table (Site of Grace) and reload to progress. You'll see that D is gone, so go ahead to the back room as shown in the video above. Once you get there, you'll see D's corpse and Fia will disappear somewhere.

The Twinned Armor Set Can Be Obtained From D's Corpse

You can obtain the Twinned Armor Set from D's corpse. You will need it later if you want to trigger D's quest at the end of Fia's questline.

From After D's Death To The End Of The Questline

If The Radahn Festival Does Not Start, Try The Following

▲ How to get to Nokron from underground.

After the defeat of Radahn, a large hole caused by a meteorite to the west of Fort Haight will lead to Nokron. The nearest Site of Grace is Fort Haight West, so you can fast travel there. If you haven't unlocked the Site of Grace yet, you can follow the directions in the above image to reach Nokron.

As you advance through the Siofra Aqueducts, you will find an NPC (D's brother) nodding off in front of the boss area. If you speak to him while the Twinned Armor Set is in your inventory, you can give it him and a quest flag will activate which will slightly change the ending of Fia's questline. In this ending, you will be able to get D's weapon, so make sure to pick up the Twinned Armor Set from D's corpse if you haven't yet.

Route From The Siofra Aqueducts To D's Brother

Note that if you modify the Twinned Armor Set with tailoring tools, you won't be able to give it to D' brother. Spend some runes to revert it back to its original state.

▲ Route from the beginning to the boss area

Once you warp to the bottom of Deeproot Depths, head deeper until you reach the boss area. The route is complicated, so please refer to the video above as you proceed.

When you advance to the boss area in the back, a series of boss fights will begin. When you have defeated the boss, you will obtain the sorcery Fia's Mist. Speak with Fia and choose 'No, I want to be held' to proceed with the questline.

After selecting "No, I want to be held," Fia will remark, "We must look for another existing mark." This refers to the Cursemark of Death, which can be obtained by clearing the Divine Tower of Liurnia at the end of the Carian Study Hall in Liurnia and heading to the top floor.

You Will Need To Obtain The Hidden Treasure In Nokron First

▲ Route from the first Site of Grace to the hidden treasure

Once you have obtained the Cursemark of Death, head back to Across the Roots and give it to Fia. To fast travel underground, open the map and press R3 (right stick pressed). You will be given the Radiant Baldachin's Blessing after the conversation that follows.

If you talk to her long enough, she will eventually say, "This is goodbye, my dear." Rest at the Site of Grace after she says those words.

You'll find Fia sleeping in the same spot after resting at a Site of Grace. If you approach Fia while she is sleeping, you will be given the option to touch her, and if you select 'yes,' a battle with the Lichdragon Fortissax boss will begin.

After defeating Lichdragon Fortissax, return to Fia and obtain the Mending Rune Of The Death-Prince.

You Get A Slightly Distinctive Ending

After defeating the final boss, the player can use the Mending Rune of the Death-Prince to Restore the Elden Ring by touching the broken Marika with the rune in their possession. The trophy (achievement) is the same as the normal ending, but the content is slightly different, so go restore the Elden Ring before resting at a Site of Grace if you want to see it.

Once you've obtained the Mending Rune of the Death-Prince, rest at a Site of Grace. Return to Fia and you will find her dead body. You can loot Fia's Armor Set from her corpse.

View D's Quests Not Related To Progression Of Fia's Questline

Once you have obtained the Mending Rune of the Death-Prince, rest at a Site of Grace. Return to Fia's location and you'll see D's brother and Fia's dead body. You can loot Fia's Armor Set from her corpse.

After speaking with D's brother, you can either rest at a Site of Grace or kill D's brother to obtain D's equipment. Aside from the Twinned Armor Set that you gave, you can also get the Inseparable Sword.

Talk To D's Brother To Get The Weapon

There is no need to kill the brother to get D's equipments. You just need to talk to him. He will drop his brother's weapon when defeated but other than that there isn't much merit from defeating him.

Thinking about the possibility for D's Brother to have a story in the future updates of the game, it is wiser to keep him alive.

Fia Questline - What Happens If Fia Holds You?

If you embrace Fia at Roundtable Hold, you can obtain a consumable called Baldachin's Blessing. It uses FP to temporarily boost poise, making it harder to be stunned by enemy attacks.

Maximum HP Is Reduced While In Possession

While Baldachin's Blessing is in your inventory, you will receive a debuff the reduces your Maximum HP. Once you have been held by Fia and proceeded with the questline, you can use it to keep it out of your inventory.

Can Be Reacquired By Speaking With Fia Again

If you have used Baldachin's Blessing, you can obtain it again by speaking with Fia. If you need it, you can head to Roundtable Hold and hug her again.

Fia Questline - What To Do If Fia Is Gone

After D's Death, She Will Appear At The Deepest Part Of Deeproot Depths

▲ Route to the deepest part of Deeproot Depths.

After seeing D's corpse in the back room of Roundtable Hold, Fia will move to the bottom part of Deeproot Depths. It is an underground area that can be reached after defeating the Caelid boss Radahn in Nokron, Eternal City.