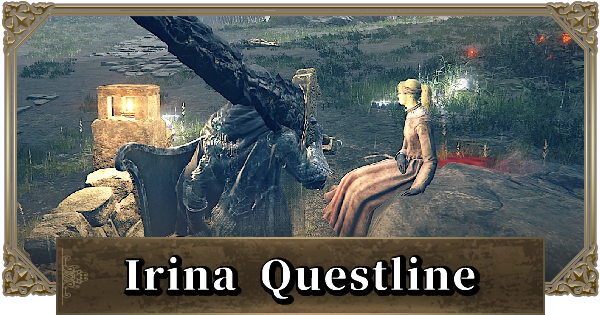 Irina Quest Guide For Elden Ring. See Questline walkthrough on Irina's Letter, Father's location, how to save dead or alive Irina, Edgar, and missing or not spawning quest!

Irina is located on the South Of Bridge of Sacrifice in Limgrave, interact with her to start a conversation. You will be requested to deliver a letter to Irina 's father, Edgar.

Hand over the letter to Edgar on the roof of Morne Castle located in the South Of Bridge of Sacrifice. Note that many small cronies appear on the way to the rooftop. You can also get Sacrificial Twig by talking to Edgar.

How To Get To Edgar's Place

After defeating Leonine Misbegotten located the map and fast travel to Edgar's location in the roof again. Talk to him and discuss going back to Irina. If you have defeated the Leonine Misbegotten, before handing over the letter, rest in the Site of Grace and talk to Edgar once again.

How To Get To Leonine Misbegotten

Talk to Edgar in the South Of Bridge of Sacrifice where you previously had a conversation with Irina, who was killed on the spot. Edgar talks about finding the culprit behind Irina's death thus unlocking Edgar's event. The Irina event ends here.