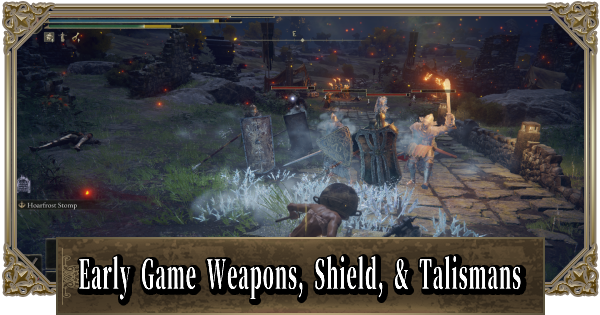 This article is Early Game Weapons, Shield, & Talismans For Beginner for Elden Ring. See guides on how to get the early game weapons, armor, & talismans that are good for beginner.

How To Get Claymore

Claymore can be obtained inside a treasure chest at Castle Morne. If you are finding it difficult to obtain, follow the guide below:

How To Get Claymore?

Way To The Treasure Chest

Claymore - How To Get & Stats

How To Get Uchigatana

Uchigatana is Samurai's starting weapon. It has a long reach and hemorrhage effect so it is convenient to use. You can get it at the lower floor of Deathtouched Catacombs.

Uchigatana - How To Get & Stats

How To Get Bloodhound's Fang

You can get Bloodhound's Fang by defeating Bloodhound Knight Darriwil at Forlorn Hound Evergaol. The boss will be easier to defeat if you use shield that reduces Physical Damage such as the Beast Crest Heater Shield.

Bloodhound's Fang - How To Get & Stats

How To Get Reduvia

Reduvia - How To Get & Stats

How To Get Meteorite Staff

A glinstone staff that has INT Scaling stat at S even without upgrade. It is very strong when paired with a spell, Rock Sling, that can be acquired in an underground cellar nearby.

Meteorite Staff - How To Get & Stats

How To Get Icerind Hatchet

▲ It is near the Site of Grace (Temple Quarter)

You can use the skill Hoarfrost Stomp, a wide-range skill that deals powerful damage overtime. It is very effective against enemies and bosses.

Icerind Hatchet - How To Get & Stats

Ash of War: Hoarfrost Stomp Is Also Available at Liurnia

Default weapon skills can also be freely replaced by using Ash of War. Ash of War: Hoarfrost Stomp can be obtained in Liurnia. Find the invisible Teardrop Scarab in a small body of muddy water. You will notice a trail of footprints roaming in the area.

※ In update 1.03, the Great Turtle Shell has been nerfed and has been removed from the recommendations.

How To Get Beast Crest Heater Shield

Head northeast from Site of Grace (Warmaster's Shack) until you see a soldiers camp. Beast Crest Heater Shield is available from the treasure chest in the camp.

How To Get Erdtree's Favor

▲ Use Stonesword key at the entrance

Erdtree's Favor is the most useful talisman from early until endgame. Obtaining it may be difficult but it is recommended to do so.

How To Get Graven-School Talisman

Graven-School Talisman available at Raya Lucaria Academy in Liurnia. Obtaining it will take time as you need to traverse the path behind the illusory wall near the Site of Grace (Debate Parlor). This talisman is recommended if you play a mage class as it boosts potency of sorceries.

How To Get Blessed Dew Talisman

Blessed Dew Talisman is obtained by teleporting using the treasure chest at the top of Tower of Return. You will be teleported to Leyndell, Royal Capital. Progress and head to the right past the giant and open a treasure chest.