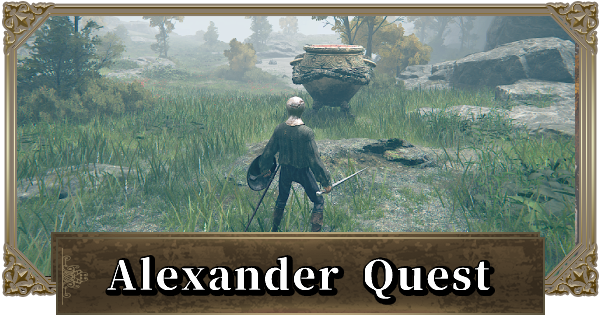 You'll find Alexander in a hole at the southern cliff by the Limgrave Site of Grace Saintsbridge. Talk to him and choose the "Help him out" option. You can rescue him by attacking from behind.

From Site of Grace Fort Gael North Until Alexander

Check the Site Of Grace Starscourge Radahn After Clearing The Game

If you don't proceed with Alexander-related Questlines even just once and end up clearing the game, you will have to check out the Site of Grace Starscourge Radahn. He appears here quite often.

You'll find Alexander in a hole south of the Carian Study Hall near Liurnia's Site of Grace Artist's Shack. Select "Help him out." After hitting Alexander from behind thrice, throw the Oil Pot at him, and hit him again thrice to save him. You can craft the Oil Pot as well.

How To Get Oil Pot: Merchant Selling Cookbook Location

The Cookbook needed to craft the Oil Pot can be purchased from the Merchant at the Siofra River with 1000Runes. It's would be good to go from Siofra River's Site of Grace Worshippers' Woods. You can craft an Oil Pot with 1 Melted Mushroom and 1 Cracked Pot.

Alexander can be found at Caelid's South Of Site of Grace Seethewater Terminus. Talk to him to get the equipment Jar helm.

Fire Giant - Location & How To Beat

Alexander is by the rubble southwest of Site of Grace Dragon Temple Lift at Crumbling Farum Azula. Talk to him to start the battle, and if you win, you'll receive Alexander's Innards & Shard of Alexander Talisman as rewards.

From The DragonTempleLift Until Alexander's Location

What To Do If Alexander Is Missing

Where To Find Alexander If Missing

In most cases, you can find Alexander at this location up until the Radahn Festival.

Up until you finish clearing the game, in most cases you'll find Alexander in this location if you haven't talked to him at at all.

Although it's unclear if these conditions apply whether you've spoken to him at least once, there are some cases of finding him by skipping the Carian Study Hall hole and being at the lava waterfalls south of the Site of Grace Seethewater Terminus.