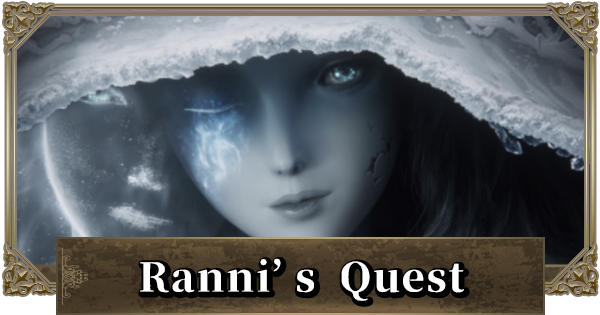 Ranni the Witch appears above the Ranni's Rise that is located at the Liurnia. This area will not be unlocked unless you clear the Caria Manor area.

You Can Finish This Quest Without Continuing Renna's Quest

Route Towards The Boss In Caria Manor

Talk to Ranni and pick "Serve Ranni The Witch". Head downstairs and talk to Blaidd, Iji and Seluvis. Head up stairs once again and talk to Ranni untol she says " I shall soon enter my slumber.".

If you are in a Hostile / Battle mode with Iji, Blaidd and Ranni, you will not be able to proceed to the quest. In this case, heading to the Church of Vows to restart will help.

To proceed to the next part of the quest, you must first defeat the Starscourge Radahn, located at the Wailing Dunes.

Tips To Match Up With Radahn

Tips To Match Up With Radahn

If Radahn Doesn't Show, You Can Try The Following

Nokron is located in the Limgrave area, which can easily be easily reached by using the Site of Grace west of Fort Haight. You can check our video below as a reference on how to go to Nokron.

After obtaining the treasure, you can leave Nokron by using the Site of Grace located beside the stairs.

Route From West Side Going To Nokron

Route Towards The Hidden Treasure

Hand over the treasure to Ranni. Talk again to Ranni in order to obtain the Carian Inverted Statue. Head over to the Carian Study Hall entrance and interact with the pedestal by putting the statue above.

Get The Snow Witch Hat Inside The Tower

You can find the Snow Witch Hat inside a chest, located in the upper part of Ranni's Rise.

After receiving the Carian Inverted Statue, proceed to Seluvis Rise and interact with his deceased body. You will obtain an armor set called Preceptor's Set and a Seluvis's Bell Bearing. Since this is an irreversible quest, you must finish first Seluvis' Questline before proceeding to Ranni's Quest.

Use the Site of Grace above Ranni's Rise and proceed to Ainsel River Main to pick up the Miniature Ranni Doll. Rest on the nearest grace and talk 3x to the Miniature Doll of Ranni.

Go straight to the Uhl Palace Location and just ignore the enemies that you will encounter along the way.

As you head deep inside the ruins, you will reach the Nokstella, Eternal City. Go to where the elevator is, and also a Site of Grace can be spotted once you arrived in the area. Talk to Miniature Ranni at the Site of Grace as she will tell you a story.

Route From Nokstella Entrance Going To The Elevator

Go through the sarcophagus beneath the cave that is located nearby to the waterfall. You will also encounter the Baleful Shadow. Defeat the shadow and obtain an "Discarded Palace Key".

Heading deeper to the ruins will lead you to Lake of Rot. Head one level below to get to a Site of Grace. Unlocking this is recommended.

Dodge & Counterattacks Are Recommended As You Attack

The Baleful Shadow will make a strong attack once it held its weapon with both hands. Its attack has a gap interval, thus it will give you ample time to evade it and also counterattack at the right time.

Once the Discarded Palace Key is obtained, teleport your way straight to the Raya Lucaria Grand Library in the Site of Grace, and there you will find a chest that possesses a Dark Moon Ring. Then proceed to the Lake of Rot.

Go to the Lake of Rot and cross the lake towards a ruin that serves as a switch. This certain switch will activate the sarcophagus passage towards the Grand Cloister. Crossing the lake will decrease your health, so make sure to bring enough Preserving Boluses.

Once the switch is activated, you can go straight down towards the Grand Cloister and go near sarcophagus the waterfall.

Route Towards The Switch

Upon entering the Grand Clostier area, a battle with a boss named Astel Naturalborn of the Void will automatically start. Defeat the enemy to proceed with the quest.

After defeating Astel Naturalborn of the Void, you may use the elevator and proceed to the Moonlight Altar.

Go to the Cathedral of Manus Celes, you can ignore the Glintstone Dragon Adula that you will encounter. Find the hole on the floor, go down and follow the path until you reach Ranni's location. You will also need to give Ranni the Dark Moon Ring you obtained in the library.

At the end of Ranni's questline, you will obtain a weapon called Dark Moon Greatsword, a Greatsword with a weapon skill of Moonlight Greatsword. You can check the details of the weapon in your inventory.

What To Do If Ranni's Not Available

Ranni's quest can also be triggered upon defeating Starscourge Radahn, even if you haven't spoken with Blaidd or Iji. Ranni will appear once you defeated Radahn.

How To Get Radahn's Rain Skill?

Check For The Hostility Status

If Ranni, Iji, and Blaidd are under hostility you will not be able to proceed with the quest. You may be able to restore their hostility by visiting the Church of Vows.

Other Things To Do After Ranni's Quest

You Can Talk To Ranni At Ranni's Rise

Upon completing Ranni's quest, a Site of Grace will be unlocked at the tower of Ranni's Rise. You can either rest at the site for a while or enjoy a little conversation with the Miniature Ranni doll.

You can fight will Blaidd that can be found at the entrance of Ranni's Rise. Once you defeat Blaidd, you will obtain a complete set of Blaidd's armor.

After defeating Blaidd, go to Iji and select the "End of Blaidd". Converse with Iji and rest at the nearest Site of Grace, you will obtain Iji's Mirrorhelm and IJi's Bell Bearing.