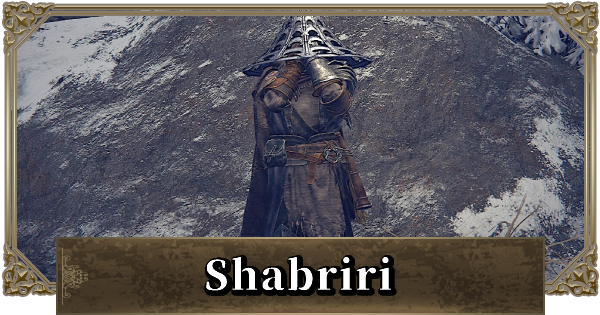 Appears At Zamor Ruins In The Mountaintops Of The Giants

Killing Him Is Fine If You Only Want The Equipment

Since the drops for killing him and the quest rewards are the same, it is recommended that you kill Shabriri instead if you only want the Ronin Armor Set. However, if you want to obtain the rewards by completing the questline, it is necessary to watch the Flame Of Frenzy cutscene, which changes the ending of the game.

▼ Click here for notes on the Flame of Frenzy ending

If you watch the Flame Of Frenzy cutscene before talking to Shabriri, you'll get the Ronin's Armor Set as a quest reward, which you can find at Shabriri's location. If you want to see the conversation with Shabriri, head to his location before doing the Flame of Frenzy event.

You Can Watch The Flame Of Frenzy Event After The Ending

Speak with Shabriri at the Zamora Ruins Site of Grace in the Mountaintops of the Giants. Continue talking to him until he says 'May chaos take the world!' He will then tell you to go the Forsaken Depths under the Erdtree in the Royal Capital.

Head down the stairs from the Avenue Balcony Site of Grace in Leyndell, Royal Capital. Enter the well while avoiding enemies and head for the Underground Roadside Site of Grace. Since it is quite difficult to follow the route towards the well, please refer to the video for instructions.

You Can Go There Even After It Becomes The Ashen Capital

Even after progressing the story and it turns to the Ashen Capital, it is still possible to go to the Forsaken Depths. Go straight ahead from the Leyndell, Ashen Capital Site of Grace and enter a certain well.

From the Underground Roadside Site of Grace, head to the Cathedral of the Forsaken by going deep into the Forsaken Depths. In the cathedral, you will find a boss called "Mohg, The Omen." Defeat him to proceed with the questline.

Underground Roadside ~ Route To Cathedral Of The Forsaken

Until The First Shortcut Is Unlocked

Until The Second Shortcut Is Unlocked

Route To The Boss (Cathedral Of The Forsaken)

Go down the scaffolding from the Cathedral of the Forsaken and head to the Frenzied Flame Proscription Site of Grace. The door at the back cannot be opened if you have armor equipped. If you unequip and open the door, a cutscene event will begin. After watching the cutscene, head to the Zamor Ruins, where Shabriri is located.

Route To The Frenzied Flame Proscription Site Of Grace

When you return to the Zamor Ruins after the Flame of Frenzy event, you will find that Shabriri has disappeared. You will find Yura's Ronin Armor Set (quest reward) at Shabriri's location.

When you have done the Flame of Frenzy event and Shabriri has disappeared, you can summon him as a cooperator during the battle with Hoarah Loux in Leyndell, Ashen Capital. Shabriri will be a powerful cooperator in this fight because of his short and long-ranged attacks. After the battle, however, there is no additional dialogue.

Shabriri Questline - Notes On The Flame Of Frenzy Ending

The Ending Will Change

If you have seen the Flame of Frenzy cutscene before the ending, the ending will change to the Lord of Frenzied Flame. There is a way to return to the normal ending, but be aware that you will have to go through various steps.

How To Avoid The Flame Of Frenzy Ending

Use Miquella's Needle from the tools section of the inventory. You'll see an option, and if you choose yes, you'll be able to quench the Flame of Frenzy and proceed with other endings.