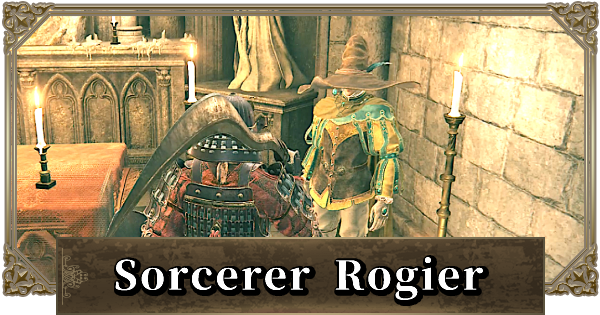 ※ All of these steps can be skipped

To start Rogier's questline, you will need to progress in Stormveil Castle in order to meet him. Defeat Margit, The Fell Omen at the entrance of the castle and proceed to the Rampart Tower Site of Grace (the second one you find).

Once you go outside of the Rampart Tower, head left and go down the stairs. You'll see three hawks on the wall, so defeat them instead of ignoring them to make it safer to move around.

You'll find Sorcerer Rogier once you enter the church. If you choose the "I'm here to defeat Godrick" dialogue option, he will sell you three Ashes of War.

Talking To Him In The Castle Is Not Mandatory

After defeating Godrick the Grafted, Rogier will appear at the Roundtable Hold. Proceed to the castle to continue with Sorcerer Rogier's questline.

Godrick the Grafted - How To Beat

Changes Based On Actions Taken Prior To Serving Ranni

All of Rogier's quests end with his death. The outcome will change if you have progressed D's questline or if you have obtained the Black Knifeprint before you have served Ranni in her questline.

D's And Ranni's Questline Can Proceed

Go to Roundtable Hold and turn right without jumping down to the first floor. You'll find Rogier leaning against the wall. Talk to him and he will give you Rogier's Rapier +8. You can also purchase the Ashes of War sold at Stormveil Castle from here.

Although it seems unrelated, the next step is to proceed with Ranni's questline. After meeting Ranni at the Church of Elleh, head north to Liurnia.

Flag For Ranni To Fall Asleep

You will be unable to leave the tower once Ranni's questline begins. Continue talking to her until Ranni says that she needs to sleep. Afterwards, you are free to exit the tower.

When you return from Ranni's Rise, you'll see Rogier slouching a bit. If you speak to him in this state, he will tell you that he is feeling very drowsy.

If Rogier tells you that he is feeling drowsy, rest at the Site of Grace. When you return to him, you'll see that he has fallen asleep.

After checking on Rogier, who has fallen asleep, change the time to morning. Afterwards, fast travel to another location and return to the Roundtable Hold. Once you return to his location, you'll find that he has dropped the following items.

To change Ranni's questline, you will have to clear the Black Knife Catacombs in Liurnia. In addition, by defeating a hidden boss, you can obtain the Black Knifeprint.

If you are unable to proceed with Ranni's dialogue, talk to Rogier and choose the 'Ranni cast off her cursemark' dialogue option. He will then suggest that you become Ranni's vassal.

Once Rogier tells you to serve Ranni, return to her location. Speak with her and choose the 'I wish to serve you' option. Afterwards, continue with the normal route.

▲ How to proceed with the questline after serving Ranni

In addition to reporting to Rogier that you have defeated Godrick, ask him about D. If he doesn't mention D, proceed with D's questline first until he moves to Roundtable Hold.

In order to proceed with Rogier's questline, you will need to advance D's questline until you hear about D from Rogier. The steps for progressing D's questline is as follows.

By proceeding with D's questline and listening to D's story about Rogier, a quest flag will activate for the appearance of Rogier's Letter when he dies. Afterwards, proceed with Rogier's questline by serving Ranni or by showing him the Black Knifeprint.

If You Cannot Find Rogier

If You Cannot Find Rogier At The Stormveil Castle

If Rogier Is Not At Roundtable Hold

Rogier will appear at the Roundtable Hold after defeating Godrick the Grafted in Stormveil Castle. Afterwards, look for him at the terrace in Roundtable Hold.

Ashes Of War Available For Purchase