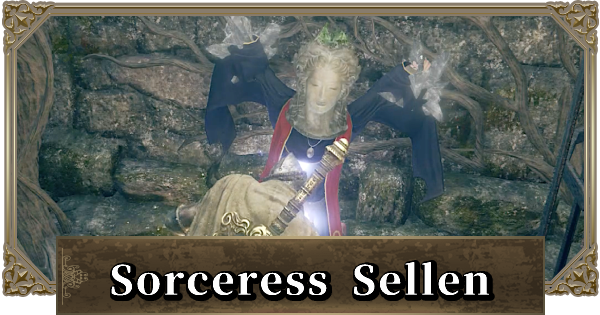 Appeared At The Waypoint Ruins In Limgrave

The Waypoint Ruins where Sellen is located is marked by the road leading to the basement around the center. If you go ahead, there is a "Mad Pumpkin Head", so by defeating it, Sellen's Quest will start.

If you defeat the boss "Mad Pumpkin Head" of Limgrave "Waypoint Ruins", you can meet Sorceress Sellen at the back. In the conversation, answer "I want to learn Sorcery" → "It's okay" and form a teacher-apprentice relationship. Now you can buy scrolls and sorcery after the conversation.

Talk to Primeval Sorcerer Azur at Mt. Gelmir on Altus Plateau and get the sorcery "Comet Azur Spell". The road to Azur is the most difficult part and it is complicated. Since the place is itself is hard to traverse, watch the video below for the specific route.

Also, another method is if you die by being restrained by an enemy who is down from the water wheel of the Academy of Raya Lucaria, you will fly to the vicinity of Mt. Gelmir, but I do not recommend it because you have to defeat two bosses.

To The Place Where Primeval Sorcerer Azur Is

After getting Comet Azur, talk to Sellen. Select "Show Azur's magic" and again in conversation, "What is the story?" → "Journey together". In addition, she speaks to "I have a request for you" and receive Sellian Spellbreaker, and in the final conversation she hears Lusat's clue.

The Church of Plague has nothing to do with the progress of the event, but let's aim for this as a temporary waypoint.

Sellia Hideaway continues near the wall from the church toward the arrow side of the image, and when you attack the wall at the location of the map image, the hidden cave appears. It is convenient to have a torch because the cave is dark. There is a wall that hits you when you go straight, but it is a road that you can attack in two places. Receive the Stars of Ruin Sorcery in the depths of the cave and return to Sellen.

You Don't Have To Defeat The Cave Boss

If you go all the way to the back, you will be in a battle with the boss "Putrid Crystalians". However, since the room where Lusat is trapped goes by another route, the Sellen quest can proceed without defeating the boss.

The Shortest Route To Where Lusat Is

After defeating Radahn, when you talk to Sellen at the Waypoint Ruins, you are asked to meet the captive half of her body. Defeating Radahn is a condition for proceeding with the quest, so if you haven't advanced the story, proceed.

Talk To Jerren At Redmane Castle

From here, it is important to talk to Jerren in the room at the back of the square of Caelid's "Redmane Castle" after defeating Radahn. If you continue the conversation at this place until you hear the line 'If you have a connection, I'll meet you somewhere again. Brave man' the movement condition will be established.

Jerren Is In The Witchbane Ruins

When you move to the Witchbane Ruins, "Jerren" is in front of Sellen, which has become a shell. When you hear the conversation, you can hear the line "Sellen is still going somewhere" and you can hear the story that you feel threatened to Sellen.

In order to prcoeed with the next quest, you will have to go through Caria Manor to an area called the Three Sisters. First of all, let's proceed to the place of "Ranni's Rise" where there is a blessing with reference to the image.

The route from Ranni's Rise to the hidden basement. The basement can be found by Jump Attack towards the floor, so please refer to the video.

▲ Attack the wall at the back of the basement opens a passage to the hidden room.

If you go through the basement, you will find Sellen, so if you transplant the Primal Glinstone, the quest will be completed. Here you will be able to buy sorcery again like before.

Go straight from the blessing of the Raya Lucaria Grand Library, and there are two summon signs in front of the large door on the outside. The red sign is hostile to Sellen route, and the yellow sign is cooperate with Sellen route. "Azur Set" and "Lusat Set" will also be available on the survival of Sellen route, so it is recommended to cooperate on the first go.

If you helped Sellen to see what's changed, head to Mt. Gelmir where Azul was and the Sellia Hidden Cave where Lusat was, and you'll get a complete set of both.

How To Make Sellen Survive To The End [Spoilers]

Advance The Quest Without Searching For Lusat

The way to make Sellen completely alive without changing her looks is to not look for Lusat and do not report about his location. Defeating Radahn will advance the quest to the end, if you want to survive completely, leave the search for Lusat. If you don't report it, Sellen will be in the center even after the blessing, and Rennala will be at the edge of the library.

Dialogue That Talks About The Bodies Of Both Masters

Sellen wanted the bodies of "Azur" and "Lusat", and said, "If the bodies of both masters are aligned, the academy will surely be at its source." but it seems that Sellen also sought the source.

Sellen Changes When You Report The Location Of Both Masters

By reporting the location of the body of "Lusat", Sellen tries to deal with the contradiction of the source, and at the end of the quest, she appears in an endless form.

Sorceries That Can Be Purchased

Sorceries That Can Be Purchased From The Beginning

Sorceries That Can Be Purchased After Passing The Scroll