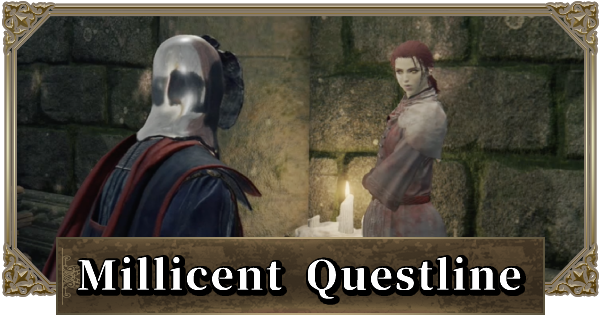 Appearance In The Church Of The Plague In Caelid

Drop Changes Depending On Timing

At version 1.04 update, after you chose to cooperate you cannot kill Millicent for she is blocked by a barrier.

1. Go to Gowry's Shack in Caelid and speak with the Gowry

First, let's head to Gowry's Shack in Caelid. If you're heading from Limgrave, head east on the road north of the map to reach the Site of Grace "Kingsrealm Ruins". From there, just go counterclockwise along the south road. When you get to Gowry's Shack, talk to Gowry inside.

One Teleport Is Enough To Clear "Can You Give Me Some Time With This?"

You will be asked to wait for a while after handing over the Unalloyed Gold Needle, but if you talk again after teleporting, the quest will start and you will receive the repaired Gold Needle.

3. Head To The Church Of The Plague Through Sellia, Tower Of Sorcery

From the cliffs south of Fort Faroth, you can use the Spiritspring to head down. If you already unlocked Fort Faroth's Site of Grace, this path is faster than releasing all the seals in Sellia, Town of Sorcery.

▼From Sellia, Town of Sorcery To Church of the Plague Route Video

4. At Church of the Plague, talk to Millicent and give Unalloyed Gold Needle.

When you arrive at the Church of the Plague, talk to Millicent in front of the Site of Grace. If you give Millicent a Unalloyed Gold Needle, she will fall asleep but if you teleport or trigger a load screen in-game, the quest will continue. If you talk to her again, you will get the Prosthesis-Wearer Heirloom Talisman.

5. Return To Gowry's Shack And Talk To Millicent

When you return to Gowry's Shack after receiving the Prosthesis-Wearer Heirloom, Millicent will be on the place where Gowry was so talk to Millicent. After the conversation, once you trigger a load screen, Millicent will disappear and Gowry will appear as usual.

From Here, You Can Summon Millicent at Magma Wyrm Makar Battle

Once you reached up to this part of the quest, you can summon Millicent when battling the boss Magma Wyrm Makar at at Ruin-Strewn Precipice, Liurnia. You can continue the event without summoning Millicent and there will be no problem if Millicent dies during the battle.

After That, You Can Purchase Magic At Gowry's Shack

From this point of the quest, you can buy magic by talking to Gowry at Gowry's Shack. It is important to check this if you use sorceries often when battling.

6. Go to Erdtree-Gazing Hill and talk to Millicent.

7. Obtain Valkyrie's Prosthesis At The Shaded Castle And Give It To Millicent.

After the conversation, go down the right without climbing the slope where Millicent is, and continue north towards the Shaded Castle. If you can get the Valkyrie's prosthesis from the treasure chest in the Shaded Castle, return to the position where Millicent is and hand over the Valkyrie's Prosthesis to proceed with the quest. The location of the treasure box is difficult to understand, so please refer to the video below.

How To Get The Valkyrie's Prosthesis?

From Here, You Can Summon Millicent During The Battle With Black Blade Kindred (Forbidden Lands)

After giving Valkyrie's Prosthesis, You can summon Millicent before battling against the Black Blade Kindred in front of the Grand Lift of Rold at Forbidden Lands. Summoning does not have an effect on Millicent Questline and even if the summoned Millicent dies, it has no affect on the quest.

8. Go To The Windmill Village's Heights And Talk To Millicent

After handing the Valkyrie's Prosthesis to Millicent, head northeast of the map to the Windmill Village in Windmill Heights. You can make a shortcut by using the transfer device on the way. When you arrive at the top, you will face the boss "Godskin Apostle", and after defeating it, unlock the Site of Grace and once you teleport, Millicent will appear nearby, talk to her.

9. Go To The Ancient Snow Valley Ruins And Talk To Millicent

Next, head to the Snow Valley Ruins at the Mountaintop of the Giants and talk to Millicent.

10. Talk To Millicent At The Prayer Room of Miquella's Haligtree

After talking to Millicent at the Snow Valley Ruins, she will appear beside the Site of Grace: Prayer Room so talk to her. To get to the Miquella's Haligtree, you need to light up the 4 flames at Ordina Liturgical Town and warp using a Portal (Gateway).

Head within Miquella's Haligtree until you reached Site of Grace: Drainage Channel. Afterward, head to the entrance shown in the photo above and climb the platform. Follow the path to reach a swamp and battle the boss "Ulcerated Tree Spirit". After defeating the boss, you will find 2 kinds of Summon Sign. Choose one of those sign to continue the quest.

Path Until The Signs

When defeated, a golden sign and a red sign will appear on the scaffolding of the swamp, and depending on which sign you choose, you will be able to choose to cooperate or be hostile to Millicent, and the rewards you will receive at the quest will change.

Millicent Quest - Contents And Rewards For Each Branch Route

If you are summoned as a collaborator and defeat the enemy, you can get the "Rotten Winged Sword Insignia Talisma". Also, after returning to the original world and speaking with Millicent, trigger a load screen and head to Millicent again to pick up an "Unalloyed Gold Needle". If you return this to the flower that appears after defeating the boss "Malenia, Blade of Miquella" at the bottom of the sacred tree, you will get "Miquella's Needle" and "Ancient Dragon Smithing Stone".

Go To Gowry And Kill Him To Get His Talisman

You can then kill him after talking to him at Gowry's Shack in Caelid. You can pick up "Gowry's Bell Bearing" and Talisman "Flock's Canvas" from his body. Due to the bug mentioned above, it is recommended to choose a hostile route (Red Sign) if the "Flock's Canvas" is your goal to surely obtain the item.

If you are summoned as an adversary and defeat Millicent, you can get the Talisman "Millicent's Prosthesis". Return to Gowry's Shack in Caelid, where you can pick up "Gowry's Bell Bearing" and "Flock's Canvas" Talisman from Gowry's corpse.

What To Do When Millicent Does Not Appear?

▲ At first, Millicent wasn't in the prayer room, but when the story boss "Maliketh" was defeated, she appeared.

Millicents will appear in various places in the preparations shown on the chart, but whether or not Millicent moves depends on the progress of the story. Therefore if Millicent does not appear in the expected location, advance the story once and check again during breakthroughs such as defeating bosses.

If Millicent does not move to the next location after conversations, trigger a loading screen by resting on Site Of Graces.

Defeating It Does Not Affect The Progress Of The Event