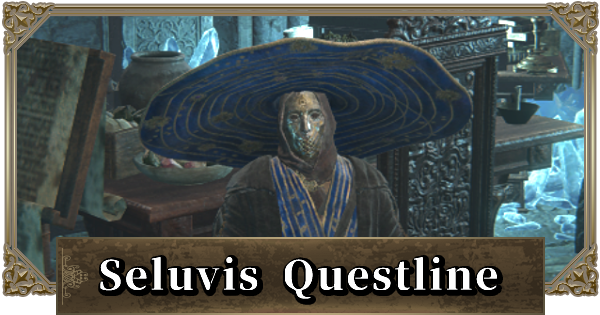 Seluvis Questline & Location Guide for Elden Ring. See how to get Seluvis's Potion, schemes & outcomes, rise basement location, Seluvis questline, & what to do if Potion or quest not working?

Appears at Seluvis's Rise in Liurnia

Can Only Be Met When Ranni Event Started

How To Activate Seluvis Questline

To get to the Three Sisters in Liurnia, the "Caria Manor" must be cleared. Proceed north along the western edge of Liurnia and go to "Caria Manor" first.

▶ Liurnia Of The Lakes Map & Bosses

After leaving Caria Manor, you will be able to start a Ranni Questline and talk with Seluvis. He will tell you to come to see him in the nearby tower, so go see him after you finish talking to all NPCs and exhausting their lines.

From Ranni's Rise, head southeast and speak with Seluvis. He'll hand you a "Seluvis's Potion" and order you to give it to Nepheli. The Questline will take a different path depending on who you give the potion.

The path differs depending on who you give "Seluvis's Potion" to and which puppet (Spirit Ashes) you can obtain. If you offer the potion to either Nepheli Loux or Dung Eater, the person will die.

Route 1: Give Nepheli Loux The Potion

This route is to make Nepheli Loux drink "Seluvis's Potion" as requested. Dolores the Sleeping Arrow Puppet will be available for purchase and Spirit Ashes "Nepheli Loux Puppet" will be obtained as final reward.

Route 2: Give The Potion To Sir Gideon Ofnir

The route of talking to Gideon Ofnir about the potion and handing it over to him. Since no one takes the potion, no one will die, but the number of puppets available will be reduced by one compared to other routes. This route is recommended only if you want to proceed with the Seluvis Questline without any casualties.

Route 3: Give The Potion To Dung Eater

After giving the medicine to any of the three, a conversation with Seluvis will allow the purchase of Sorceries. As with the other NPCs who can give you Sorcery, you can also give the scrolls to Seluvis. Even if you did not give the potion ot Nepheli, Seluvis will think that you gave the potion to Nepheli and proceed with the conversation.

Head to the basement located near Ranni & Renna's Rise and see Seluvis' message in the back. The entrance to the basement is hidden, but you can find the stairs by attacking the floor..

Guide From Ranni's Rise To Basement

After seeing the message in the basement, talk with Seluvis ask about the chambers. After talking to Seluvis about the chambers, you will receive a Spirit Ashes puppet. The puppet that is not given to you can be purchased at Starlight Shards later.

Choose The Puppet With Highest Price

It is recommended to choose the most expensive puppet at the first basement. For Nepheli Loux Route, choose "Dolores The Sleeping Arrow Puppet". For the rest, Jarwight Puppet will be the priority.

Dung Eater Can Be Purchased if Given The Potion

If you chose the Dung Eater route, "Dung Eater Puppet" will be available for purchase using 5 Starlight Shards.

Buy one of the puppets and talk to Seluvis to hear "About The Scheme". If you choose "interested", you will be asked to find "Amber Starlight". Even if you choose "no", you can ask about the scheme again.

Get "Amber Starlight" in the forest northeast of the Site of Grace "Alter Highway Transect" in Altus Plateau and give it to Seluvis.

Give Seluvis the "Amber Starlight" to recieve Talisman "Magic Scorpion" as reward. After that, rest at a Site of Grace and talk to Seluvis once again.

Seluvis will die at the next step and Ranni will become hostile. However, at this point, all receivable items from Seluvis were already obtained so it is recommended to continue Ranni's quest from here. This way, you can let Seluvis die without making Ranni hostile.

When Ranni is drugged as told, she wakes up cursing and in a hostile state. You will be told to leave, so leave quietly and go to Seluvis. If you continue to talk to Ranni without leaving, she will kill you the third time.

If Ranni is drugged, she and the others will be in hostile state and the three Questlines will be unable to progress. However, it can be reverted and the Questline will be accessible again if you used the Celestial Dew at the "Church of Vows".

Return to Seluvis and find him already dead, pick up the Bell Bearing and Preceptor's series equipment from Seluvis' corpse. You can still buy puppets when you examine Seluvis' corpse.

When you leave the "Seluvis Rise" and go northeast along the cliff, you will hear Pidia's screams near the Caria Castle Hall. When you go to Pidia, he is already dead, so you can get items from his corpse to end the Seluvis Questline.

It can be reached from a ruin-like area between Ranni's Rise and Renna's Rise. As shown in the video above, the stairs to the basement do not appear until you attack.

At the back of the basement, there is a room hidden by a wall that cannot be passed through without attacking; if Nepheli Loux is drugged, she will appear motionless in this hidden room.

Sorceries Available from The Beginning

※ You can purchase Sorceries after giving "Seluvis's Potion" to someone and talking with Seluvis, or after Seluvis's death (Bell Bearing).

Items That Can be Purchased After Giving The Scrolls

※Puppets can be purchased to Seluvis after speaking to him and choosing "I want a new puppet". You can purchase puppets during Seluvis Questline or by examining the corpse after Seluvis dies.