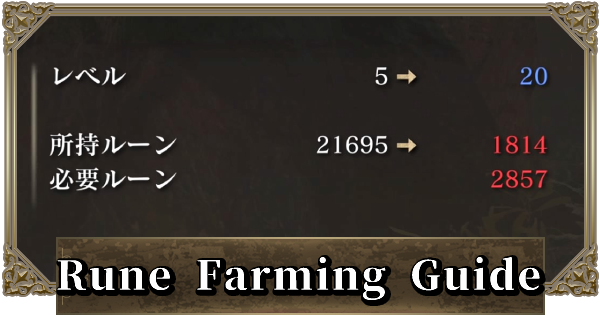 Check out this guide on rune farming for Elden Ring. This guide includes how to rune farm, level up fast, early farming spots, late game farming locations, how to use runes & more!

Lure Giant Crows Off A Cliff

This method is simple and straightforward. Attack the Giant Crows from the cliff directly behind the the Site of Grace with a long-range attack and return to the Site of Grace once they have been lured off the ledge. Since all you need to is to be able to attack the Crows, any bow and arrow or long-range INT spell can be used to farm Runes. Using the bow is as simple as pressing L1 or L2 to zoom in, then R1.

Defeat The Frog-Like Enemies Using A Wide Range Of Skills

The method for farming the frog-like creatures is very simple: repeatedly kill the frogs in front of the Site of Grace and return to the Site of Grace in an endless loop. As long as you have skills such as Hoarfrost Stomp, which is available at the start of the game, it's stable farming. If you already defeated the last boss, you can use the Sacred Relic Sword for super fast farming.

How To Get To The Mohgwyn Dynasty Mausoleum

Talk To The White-Faced Varre

After clearing the Stranded Graveyard, there is a masked person near the Site of Grace “The First Step”. Talk to him and he will ask you if you want to be a member. Accept and you will be asked to defeat Godrick The Grafted.

After defeating Godrick The Grafted, examine "Two Fingers" at the round table. You will find that Varre dissapeared but a note will be left telling you to go to the Rose Church in Liurnia. Head to the Rose Church and talk to Varre. In the conversation reply 'They didn't seem right' to receive 5 "Festering Bloody Fingers".

The next thing you need to do is to consume 3 Festering Bloody Fingers to start three invasions. It doesn't matter if you win or lose during the encounter, just invade 3 times. Once this is done, talk to Varre once again and select 'Anoint Me' to receive the Lord Of Blood's Favor.

Dye The Cloth With The Blood Of The Shrine Maiden

Go to the Chapel of Anticipation from The Four Belfries in Liurnia. After defeating the Grafted Scion there, go to the church in the back, where you will find the corpse of a maiden, which you can examine to dye it with blood.

Killing Irina and Hyetta will also dye the cloth with blood, but then their NPC events will not occur, so it is recommended to go to the Chapel of Anticipation instead.

If you talked to Varre twice after you've dyed the clothe with blood, you'll receive the Pure Blood Knight's Medal. By using it, you'll be able to get to Mohgwyn Dynasty Mausoleum and start farming runes!

How To Get To Mohgwyn Dynasty Mausoleum From The Snowfield

The Right Secret Medallion piece can be obtained in the Village Of The Albinaurics. To obtain it, follow the walls until you reach the deepest part of the area and destroy pots until you find the one Albus has turned into for him to appear. Talk to him and he will hand over half of the secret medallion.

The Left Secret Medallion piece can be obtained nu unlocking the Mountaintops of the Giants and clearing Castle Sol. The video shown above starts at the Blessing of Grace at Castle Sol's Roof Top.

Activate The Grand Lift Of Rold

▲You need to switch the action with either the scroll button or R Pad to use the medalion.

Head To Gateway Found West Of The Map

The Gateway / Portal you need to use to get to Mohgwyn Dynasty Mausoleum can be found at the bottom of the cliff in the west side of the Consecrated Snowfield. There's a Site of Grace and Map Fragments there so it's recommended to get there through this route.

A Nobleman Will Attack You, So Defeat Him

If you are heading towards the Portal gate, a "Nobleman" will attack you, so defeat him first since the portal gate won't be used until he is defeated.

Transfer Gate Under The Cliff To Mohgwyn Dynasty Mausoleum

Since the Transfer Gate under the cliff is hard to find, the video above will show you the exact location and route from the big tree on the way to it. After that, you can get to the Mohgwyn Dynasty Mausoleum by using the transfer gate.

Possible To Run Even With Starter Level & Equipment

This route does not require high level of equipment or level as there are no regular attacks. After clearing the tutorial dungeon at the start of the game, there are no more battles required. You can then do this route to earn Runes right at the beginning of the game.

Get Horse And Head North To Fort Gael

From the Site of Grace, climb up the slope that is on fire in the southeast side of the map. When you get to the flat land with the ragged tent to the left, move towards the top. At the top of the hill, there is a soldier, so go down the steps to the left of the enemy and press the attack button in mid-air to hit the weapon and defeat it with a single blow.

After attacking the machine and defeating it, it will be dangerous to stay there so move away from the area to not get caught in an explosion or attacks by other enemies. It's better to roll forward three times, get to your horse, return to the Site Of Grace, and rest to make the enemy respawn..

Prepare A Weapon With Hemorrhage Passive

The Dragon's HP is high and it will not budge with just normal attacks. it's better to prepare a weapon with Hemorrage, such as Reduvia or Uchigitana to bring down its health consistently.

Head to Fort Faroth in Caelid

There are two ways to get to Fort Faroth. You can either go around the north side from Summonwater Village or use the Gateway at the Third Church of Marika to get to Caelid.

*Attack the dragon in the location marked in the photo

The dragon will not move even if you attack it, so keep attacking it until you shave off all of its HP. However, the tip of the tail does not take damage, so it's best to attack the part of its tail that's near its body.

Items That Can Increase Runes You Get

Equipping the Golden Scarab will increase the amount of Runes you get by 1.2 times. It's the best Talisman to have when you're farming for Runes.

The Gold Scarab Talisman increases the amount of Runes earned by 1.2 times when equipped, making it an essenial equipment for efficient Rune farming.\

The Golden Scarab can be obtained upon defeating the boss in the Abandoned Cave. The cave itself is filled with corruption, so it's best to prepare Preserving Boluses for it.

The Gold-Pickled Fowl Foot item increases the amount of Runes earned by 1.3 times for a certain duration. Although it is only for a certain period of time, you can earn Runes efficiently with it so if you have the item, use it when doing Rune farms.

The main use of Runes is to level up your character by increasing their stats. Runes can be used at any Site of Grace. If you are not sure how to use them, you can just use them to raise your character's level.

Used To Purchase Items At The Shop

Runes are also used as a currency when buying items and equipment at the shop. Since you can buy useful items such as Cookbook, it is recommended to use leftover runes on materials.