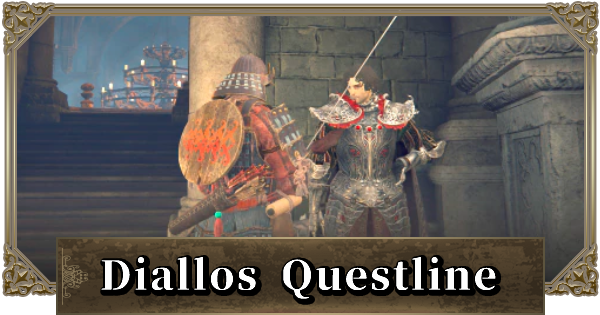 Cannot Be Continued If Rykard Is Defeated Before The Questline

If you defeat the boss Rykard before Diallos comes to Volcano Manor, he will disappear and you will not be able to proceed with the Questline. The Questline in Jar Bairn, which is related to Diallos, will also be inaccessible, so proceed with the questline before Rykard is defeated.

Diallos is found at the Roundtable Hold. Talk to him to proceed with the quest. Afterwards, go to the Site of Grace "Academy Gate Town" in Liurnia.

How To Get To Roundtable Hold?

※ A deal must be made with Melina as a prerequisite.

Go To Crumbling Farum Azula & Move To The Next Location

If you advance the story to the arrival of Farum Azula while Diallos is still in Roundtable Hold, move to the next Questline location, Academy Gate Town in Liurnia.

After unlocking the Site of Grace "Academy Gate Town" in Liurnia, you will find Diallos close to a corpse just to the north. After talking to Diallos, he then returns to Roundtable Hold.

※After Diallos arrives at Volcano Manor, the quest can be continued regardless of the timing of Rykard defeat.

After arriving at Volcano Manor, talk to Tanith and proceed with his request. Defeat István and Rilegh then talk to Diallos. Afterwards, the Diallos will disappear from Volcano Manor.

Do Not Give Alexander's Innards To Jar Bairn

Diallos Appears In A Hut After Conversation With Jar Bairn

After multiple conversations with Jar Bairn, Diallos will be present in the hut, tending to the jars. Once you confirm that Diallos is there, fast travel to any Site of Grace other than Jarburg.

After taking a rest and killing some time at the Site of Grace outside of Jarburg, moved to Jarburg again and you will find that village was under attack. Diallos is lying in the center of the village, so talk to him.

When you talk to the fallen Diallos, he asks you if he was able to protect the pots and pans and you can reply from 2 choices. Whichever option you choose, the item you get will be the same.. Talk to Jar Bairn nearby, rest at the Site of Grace, and return to the place where you fell.

After resting once again, head to the location where Diallos was to see that there are 3 items that were dropped: Hoslow's Petal Whip, Diallos's Mask and Numen's Rune.

What To Do If Diallos Is Missing

Diallos suddenly disappears during the Questline in Volcano Manor; once he is gone from Volcano Manor, you can talk to Jar Bairn in Jarburg, and Diallos will move to Jarburg.

Be Careful Of Rykard's Defeat

If you defeat the boss Rykard before Diallos comes to Volcano Manor, he will disappear and you will not be able to proceed with the Questline. If Rykard is defeated before the Questline, you will have no choice but to complete the quest in the second playthrough

Spirit In The Volcano Manor Is Different From Diallos

A Spirit that looks like Diallos appears in the hallway in front of the guest room of Volcano Manor, but it has nothing to do with the Diallos Questline. If you look closely, you will notice that the beard and armor are different, so although they look similar, Diallos and Spirit are different people.

Since he talks about the weapons to defeat Rykard, perhaps the Spirit is just giving tips for the Rykard battle.