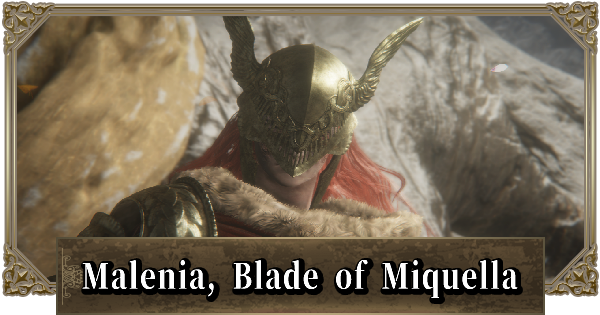 You can perform stance-breaking on Malenia by parrying.

Elphael, Brace Of The Haligtree

Malenia is located at the roots of Elphael, Brace of the Haligtree. You will need the Haligtree Secret Medallion left & right to access the Hidden Path to the Haligtree from the Grand Lift of Rold. Once you got out of the catacombs, make your way to Ordina, Liturgical Town. You need to activate the 4 candles inside the evergaol in order to gain access to the portal that leads to Miquella's Haligtree.

Malenia recovers HP whenever she lands a hit but it is still better to block dangerous attacks than dying. You can learn her attack patterns the more times you fight her which can increase your reflexes for proper timing of guarding & evading. Greatshields are recommended as it increases your poise when guarding.

You can deal great damage with Blood Loss since it works well against Malenia. Enhance & use weapons that has Blood Loss buildup. In addition, there are different builds that can inflict Hemorrhage like Rivers of Blood build, Grave Scythe build, and Godskin Peeler build.

Raise The Stats For Survivability

Equip armor that has high vitality stat & raise Vigor to increase HP to further increase your durability and survivablity. There are different ways to farm runes in Mohgwyn Dynasty Mausoleum to gain levels faster which includes luring a bird off the cliff & killing numerous idle Albinaurics. Take time to farm runes so you can raise your stats that suits your build.

Use Skills With A Single Shot

Malenia has a low poise and can be easily staggered. Whenever you can land attacks on her just remember to not overlook her attack patterns & skill. However, since you can often stagger her with attacks & skills, hit her once or twice then keep a safe distance and let her chase you.

It could be extremely difficult to avoid Malenia's attacks at a close range. If you could avoid her attacks by moving backwards, you can make a safe distance from her. Maintain it so you could avoid some of her attacks & skills. Although the chances of landing a hit on her decreases, that can be aided by using weapons that can inflict Hemorrhage.

How To Avoid Waterfowl Dance

Waterfowl Dance could be very difficult to avoid in a straightforward way. If you just want to overcome Malenia, it is recommended to use Ash of War: Bloodhound's Step on a Greatshield so you can block & dodge simultaneously.

① Chance if you don't attack

When Malenia is approaching without any sign of hostility, approach her too. If she had no movement even after landing a successful hit, quickly make a follow-up attack then make & keep a safe distance. Avoid her attacks by rolling backwards depending on her attack pattern. In this way, you can deal damage & safely dodge.

② Move Away When Intercepted

When Malenia is approaching with a sign of hostility, dodge backwards then keep a safe distance from her attacks. Observe until she finishes her attacks and wait for an opening for an attempt to land a hit. With that said, these are the choices for combating Malenia in her first phase.

Do Not Miss 3 Chances To Attack

Regardless of the distance, Malenia has three types of piercing/grab/reserve attacks which are all are powerful. She also has a technique for counterattack. Be wary of these and definitely avoid at all cost. She will have an opening when you are able to avoid these attacks.

If A Spark Comes Out From Her Prosthesis, Dodge It By Rolling Diagonally Forward

▲ Please remember that it is easy to be attacked repeatedly.

If sparks come out of Malenia's prosthesis, prepare for a quick continuous strike which can be evaded. Since it can hit you when you roll backwards, dodge it by rolling diagonally forward. Remember: when you see the spark → do not dodge backwards. An opening is available when she's done performing the chain attacks so take this opportunity to strike.

When her HP reaches 60％, she will start attacking with Waterfowl Dance. It could be very difficult to deal with as she uses it randomly. At close range, she tends to use it as a counterattack so be careful and keep your distance so you can prepare to dodge. She recovers a HP when she successfully lands a hit on you but it is better to block with greatshield than die.

After the cutscene, she uses this as an initial attack. She also uses this when her HP reaches certain percent. Whenever she uses Scarlet Aeonia, she elevates herself then lunges towards you which is followed by an explotion. You can observe her until the moment she speeds up with a thrust. After she reaches the ground, the area around her explodes that can cause your screen to shake slightly. Avoid it at all cost. If you got caught with the petals, you will be affected by Scarlet Rot buildup so wait for the flower to disappear before attempting to attack. In addition, she is vulnerable to range attacks by this moment, giving you the opportunity to make a free hit using range skills & spells, and throwing pots.

▲ When Malenia runs towards you, attack her.

During the second phase, she rarely walks or runs and consistently launches for an attack. Similar to first phase, her attack pattern & low poise did not change. Take advantage of this to attack but cautiously then keep your distance by dodging. However, you can likely land a successful hit once or twice.

Pay Attention Whenever She Counterattacks

In her second phase, she performs a counter with a kick when you are evading. Its damage is somewhat strong so be alert because it occurs quickly. There is an opening for attack if you can avoid it.

Chance To Strike After The Explosion

Once the second phase starts, Malenia uses Scarlet Aeonia, an attack where she performs a descending thrust followed by an explotion. She also has three attack techniques: grab/pierce/reserve attack that gives an opening when you dodged successfully. However, the AOE of this attack is wide so observe and wait for a chance to strike.

Learn To Distinguish The Difference Of Jump Attacks

The attack pattern for jump attacks are jumbled. If you are able to avoid the slash, watch out for the immediate thrust. The thrust is difficult to avoid and it takes time to get the proper timing to avoid it. Note that healing from afar will make her use this. If are confident that you can dodge it, make her do it often as it gives an opening for you to counterattack.

The moment Malenia rushes to you with a slash after jumping, she follows it with a continuous strike. Unlike ordinary continuous strikes, it is difficult to predict her next attack by looking at the prosthesis. You can avoid it by rolling diagonally forward before she lands and then keep distance.

How To Avoid Afterimage Attacks

How To Avoid Afterimage Attacks

When Malenia ascends with red aura, it is the signal that she is going to attack with afterimages. The 3rd to 6th strikes are the difficult strikes to avoid. If you can't avoid it, the Ash of War: Bloodhound's Step could be helpful.

How To Avoid At Close Range

How To Avoid At Close Range

Waterfowl Dance is very difficult to avoid at close range. However, the second sequence is easy to avoid & she jumps over you at the third sequence. By observing her movements, you can reduce the damage she can inflict to you. If you are not confident to avoid it, block it instead with a Greatshield.

How To Avoid At Medium Range

How To Avoid At Medium Range

The jump during the first sequence is important to gain distance in order not to get hit. There might be times when you cannot dodge the attacks so try to reduce the damage you are going to receive.

How To Avoid At Far Range

Avoiding Waterfowl Dance from afar is easy. Run away from Malenia to gain distance and let her do the first & second sequence. The third sequence is similar to avoiding at close & medium range where Malenia jumps over you then move backwards while she is finishing the third sequence.