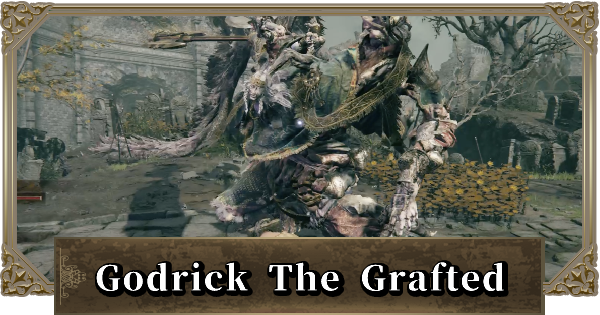 Godrick The Grafted is a boss in Elden Ring. See how to defeat Godrick, boss fight, weaknesses, drops, strategy, how to defeat, location, & how to battle with Godrick the Grafted!

Godrick the Grafted is weak against Poison and Hemorrhage, so we recommend that you use items like Serpent Arrow and Blood Grease which can be bought from merchants.

Be sure to check the gold summon sign in the passage which is in front of the boss & summon Nepheli Loux. When the battle has begun, we recommend using Spirit Ashes to provide as decoy.

Attacks While Grafted Dragon Is Equipped Can Be Dodged By Rolling

When Godrick's HP reaches 60% or less, it starts to deal flaming attacks with the Grafted Dragon. If you stand in front of it, you'll be likely to get hit. Once the flames start to appear from the mouth of the Grafted Dragon, roll to the side to dodge its attacks.

Godrick How To Beat

Since you can summon Nepheli Loux before the fight, the fight would be easier with its help. Pair this with Spirit Ashes so that you can attack Godrick from behind while it's distracted by Nepheli Loux & Spirit Ashes.

How To Avoid Its Attacks

Make sure that you put some distance between you and Godrick as it jumps in the air in preparation for its jumping slam attack. Then, when Godrick equips the Grafted Dragon, it will start to attack with flames with a wide area of attack, so, try to distance yourself even further than usual.

If you keep your distance, Godrick might unleash its wind blowing attack on you. It will attempt this attack twice consecutively, so remember to keep your distance and dodge it by rolling away the moment it comes.

This swooping fire attack has a wide area of effect. This attack can be avoided by sticking close to Godrick while doing the roll dodge as he swoops his arm to the side.

Distance Yourself As The Flames Start To Fall

When it spits flames into the air, the flames will fall down to the ground after a while. Since the range of this attack is fixed, it can be definitely avoided by keeping a safe distance away.

Since You Can't Guard Against The Bite Attack, Avoid It At All Cost

When it pulls up its left arm backward, it's giving off a sign that it's going to use its bite attack. You can't guard against the bite attack, so try to avoid it at all cost.

Go To The Top Floor Of The Divine Tower of Limgrave

After defeating Godrick the Grafted, you should receive the Great Rune of Godrick. Go to the top floor of the Divine Tower of Limgrave to regain its power. After that, you can explore another area and proceed with the main story.