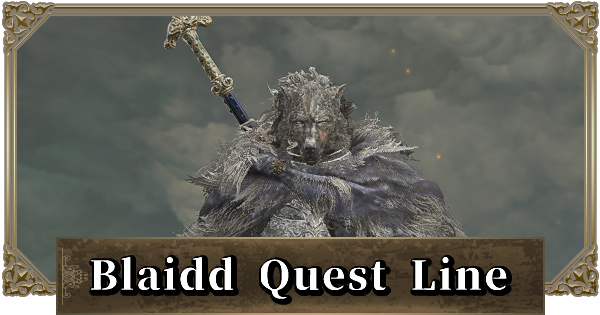 Can Only Get Blaidd's Armor By Progressing Through Ranni's Quest Line

The only way to get Blaidd's Weapon and Armor is by progressing through Ranni's quest and getting the Dark Moon Ring. When you return to Ranni's Rise, Blaidd can be found at the bottom of the tower as a hostile enemy that you can then defeat.

The only Quest Line required to get Blaidd's Equipment is to progress Ranni's Quest Line (Starting with serving her to acquiring the Dark Moon Ring).

When you approach Mistwood Ruins in Limgrave, you will hear wolves howling. You can hear it more than once if you wait, but you only really need to hear it once.

Return to Mistwood Ruins and use the Gesture "Finger Snap" below the tower where you hear the wolf howls. Blaidd will jump down and you can then talk to him. He will talk about his search for someone named "Darriwil".

Darriwil who Blaidd is looking for is the boss in the Florlorn Hound Evergaol located in Limgrave. When you enter the prison, there will be a gold summon sign for you to use to call for Blaidd there.

Can Still Progress Without Summoning Blaidd

You can still progress through Blaidd's quest line even if you do not summon him during the fight or if you've defeated Darriwil before you talk to Blaidd.

Make Sure To Unlock Site Of Grace: Agheel Lake South

Since you may return to this Evergaol in the future during Blaidd's quest line, make sure to unlock the Site of Grace: Agheel Lake South. This will make it easier to return there.

Talk to Iji About Blaidd

Iji is the blacksmith in Raya Lucaria that Blaidd was talking about. You can find him near the Site of Grace: Road to the Manor in Liurnia. If you tell Iji that you were introduced by Blaidd, you can get the Carian Filgreed Crest.

If you choose to serve Ranni at Ranni's Rise, you will find out that Blaidd is also serving Ranni. You will then be asked by her to investigate Nokron, Eternal City with Blaidd.

Head to Siofra River Well through the elevator in Mistwood in Limgrave. You will find Blaidd in Siofra River Bank standing near the Spiritspring.

Talk to Seluvis, the Intelligence Master from Nokron, and he will ask you to meet Sellen. You will receive Seluvis's Introduction from him to give to the sorceress.

To be able to talk to Sellen, you need to first defeat the boss "Mad Pumpkin Head" found within her location. Be prepared for a fight if you haven't defeated the boss beforehand. Her location is in Waypoint Ruins in Limgrave.

Head to Redmane Castle in Caelid to participate in the Radahn Festival. Blaidd will be in the square with the other NPCs who have gathered to fight Starscourge Radahn. After beating Radahn, Balidd will be near the Site of Grace in the dunes.

After the Radahn Festival, you will hear wolves howling as you approach the Forlorn Hound Evergaol in Limgrave. Examine the sealed prison and you will be able to talk to Blaidd. Continue talking to them and then rescue Blaidd.

Talk to Iji About Blaidd After The Rescue

After rescuing Blaidd from the Evergaol, you can talk to Iji about Blaidd. You don't have to talk to him to progress through the whole Quest Line, but it is an important story that relates to Blaidd's future.

Progress further through Ranni's Quest Line until you've met and defeated Astel, Natural Born of the Void. Even if you do not proceed to the end of Ranni's quest, Blaidd's quest will continue after this.

Defeating Astel without obtaining the Dark Moon Ring will not trigger Blaidd's final quest. If you completed Ranni's Quest, you should have already obtained it, but if you have not, get it.

Upon returning after arriving to the Moonlight Altar, Blaidd will appear in front of the tower. After saying a line, he will immediately become hostile and attack you. Defeat him to get his equipment.

Iji Will Die After You Defeat Blaidd

After defeating Blaidd, you can go to Iji and talk to him about Blaidd's final days. After that, if you take a break at a Site of Grace and come back, you will find Iji dead. You can get Iji's Bell Bearing and the Iji Mirror Helm from his corpse.

Blaidd Will Die If You Progress Through Ranni's Quest Line

Unfortunately, there are no routes wherein Blaidd will survive if you push through with Ranni's quest line. Multiple verifications were done during the quest line, but there was none wherein Blaidd survive. If you find a way for Blaidd to survive, post it in the comments.