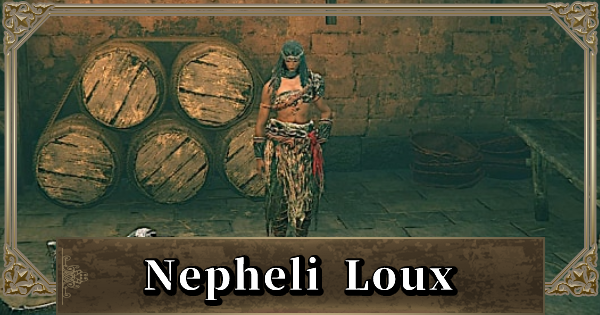 The March 17 update added a survival route for the questline. Make sure to update your software if you want to proceed with the quest on the survival route.

You can find her in a small room south of the Secluded Cell site of grace in Stormveil Castle. By speaking to her twice, you can have her as a Cooperative NPC in the Godrick the Grafted boss fight.

If you spoke with her at Stormveil Castle before defeating Godrick, you can obtain the Arsenal Charm talisman in Roundtable Hold. Keep in mind that this can be overlooked as the quest progresses.

After defeating Godrick the Grafted, Nepheli Loux will now appear at Roundtable Hold. After three conversations, she will say "I'm about to go" and the questline will proceed.

If Nepheli Loux Is Missing Or Not Showing Up

Nepheli Loux is located in the room in front of the Twin Maiden Husks at the Roundtable Hold. If she is not present, speak with Gideon Ofnir in the room with the site of grace and check again after the loading.

How To Get To The Village Of The Albinaurics

Her next appearance will be in the Village of the Albinaurics in Liurnia. The shortest route is from the Folly on the lake, although it can be difficult to find since it is located under a cliff. At the entrance of the village, you will find Nepheli sitting by the fire. Go ahead and speak with her several times.

After the conversation at the entrance, cross the stone wall and defeat the Omenkiller. Once you have defeated the boss, Nepheli Loux will disappear from the village and will head back to the Roundtable Hold.

If The Boss Is Already Defeated, Nepheli Can Still Be Found At The Entrance

Even if the boss has already been defeated, Nepheli Loux will still appear at the entrance. When you speak with her, the questline will proceed without any issues, so it is fine even if the boss is already defeated.

When you return from the Village Of The Albinaurics, you will find her down the stairs near Smithing Master Hewg. She is sitting in front of the Imp Seal Statue, so no need to use a Stonesword Key.

Items Are Required To Progress The Questline

In order to proceed with Nepheli Loux's questline, you will need certain items that are required. Choose carefully as they are involved in obtaining the spirit ash and progressing the questline.

Give The Stormhawk King To Nepheli (Survival Route)

How To Obtain The Stormhawk King

After obtaining the Stormhawk King, give it to Nepheli Loux at the bottom of the stairs in Roundtable Hold. A Finger Maiden can be found on the first floor, where the Stormhawk King was, and her blood can be dyed in the Varre questline.

Roderika Questline Is Required To Give The Stormhawk King

In order to give the Stormhawk King to Nepheli Loux, it is necessary to progress Roderika's Questline at the Roundtable Hold. If you are unable to give it to her, please refer to the above chart to proceed with the quest.

Proceed with the Kenneth Haight quest and hear from him that he is looking for a new king. Although it seems to be irrelevant, he will be involved with Nepheli Loux in the future. If you have already completed his questline, proceed to next step .

Regardless of your progression in the Kenneth Haight questline (dead or alive), Nepheli Loux will be moved to Godrick's Throne Room. Although, this is not related to the appearance of Nepheli at the throne room, those who want to move Kenneth Haight to the throne should finish his questline.

Advance the storyline and defeat Morgott, The Omen King boss in Leyndell, Royal Capital. You will need to defeat this boss to progress the storyline, so go ahead and defeat him if you haven't yet. Proceed to the next step if you have already progressed through the story and defeated the boss.

If you have fulfilled all the conditions above and passed the time at Godrick the Grafted site of grace (after defeating Godrick in Stormveil Castle), Nepheli Loux will appear at Godrick's Throne Room. By talking to her, you will receive the Ancient Dragon Smithing Stone.

If you completed Kenneth Haight's questline, he will also appear on the throne room. You can talk to him, but there will be no reward.

If Gostoc Is Alive, His Shop Will Be Available

If the player has not killed Gostoc, he will also move to the throne room. He'll open his shop and sell a single Ancient Dragon Smithing Stone worth 20,000 runes.

If You Do Not Move To Godrick's Throne Room

According to reports, they appeared in the throne room after the conditions were fulfilled by speaking with Nepheli Loux, Kenneth Haight, and Gostoc, and by passing time at the Site of Grace after defeating Godrick.

When Nepheli Loux is at Godrick's Throne Room, she can be summoned as a cooperative NPC in the fight against Hoarah Loux in Leyndell, Ashen Capital. After the battle, there is no particular conversation.

▲The Survival Route Is Up To This Point

How To Get Seluvis's Potion

Nepheli will be treated as dead if you use Seluvis' Potion on her. Instead, you'll get the Nepheli Loux Puppet spirit ash. You must complete Ranni's Questline to obtain the spirit ash, which may take some time.

Characters You Can Use Seluvis's Potion On

How To Get To Seluvis's Basement

Head for the building northeast of Ranni's Rise. At first glance, you won't be able to see anything there. However, if you hit the floor with a jumping attack, a stairway to the basement will appear. A hidden passageway will also appear if you attack the front of the room.

The starting point is at Ranni's Rise. From the Site of Grace, head east and jump down from the ramparts. You will soon hear someone screaming along the way. Proceed and fall through the hole to find a Nepheli Loux Puppet falling down.

What To Do If Nepheli Is Missing? - Nepheli Loux Questline

※ If Stormhawk Axe x 2 falls at the place where Nepheli Loux appears, then she has already died.

First, let's try to check all the locations where Nepheli Loux appears. If you see the Stormhawk Axe, it means that she has already died and you cannot proceed with the questline anymore.

If Nepheli Loux Does Not Move To The Throne Room

After fulfilling the above conditions, speak with the NPCs in the throne room. Afterwards, pass the time at Godrick the Grafted Site of Grace. If you have not finished the Kenneth Haight questline, you do not have to talk to him to have Nepheli Loux move to the throne room.

There Are Reports Of Other Solutions As Well