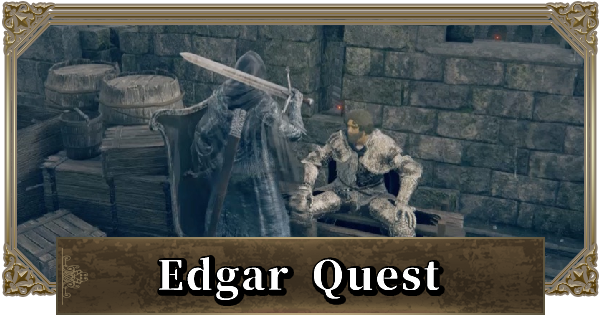 * If Irina's Quest Line has been completed, step 1 to step 4 can be skipped

1. Talk To Irina Near The Bridge Of Sacrifice

Talk to Irina, who you can find on the south side of the Bridge of Sacrifice in Limgrave. Accept her request to deliver her letter to her father, Edgar who is in Castle Morne.

2. Give The Letter To Edgar Who Is In Castle Morne

Locate Edgar on the rooftop of Castle Morne (south of the Bridge of Sacrifice) and give him Irina's Letter. You can also get a Sacrificial Twig from him. Beware that Castle Morne is filled with enemies, including a ton of Misbegottens who you will need to pass to get to the rooftops.

How To Get To Edgar's Locations

After defeating Leonine Misbegotten, return to Edgar on the rooftop and listen to his conversation regarding Irina. If you have defeated Leonine Misbegotten before giving the letter, you can talk to Edgar again after taking a rest at the Site of Grace.

How To Get To Leonine Misbegotten Location

If Edgar Is Not At Castle Morne, Do The Next Step

If Edgar cannot be found at the rooftop of Castle Morne after defeating Leonine Misbegotten, it's likely he has already moved to the location where you talked to Irina. Follow the next step to locate him.

4. Talk To Edgar In The Same Location Where You First Talked To Irina

Head to the Bridge of Sacrifice in the same place where you talked to Irina, then talk to Edgar there. Edgar will vow to find the person who killed Irina. Although Edgar's Questline continues, Irina's ends here.

5. Defeat Edgar At The Revenger's Shack

Through the east side of the small Erdtree, you will be invaded by Edgar. Defeat him to get the "Banished Knight's Halberd +8" and other items. The questline will end here.

What If Edgar Is Not There/Invading? - Edgar Questline

What If Edgar Is Not Present After Defeating Leonine Misbegotten?

If Edgar is not on the rooftop of Castle Morne after defeating Leonine Misbegotten, it's likely that Edgar has already moved to the next step of the Quest Line. Look for him in the same location where you talked to Irina.

The issue with Edgar not invading was fixed in the 1.04 Update, which was released April 19, 2022. If you were stuck with him not invading, update your game to the latest version!