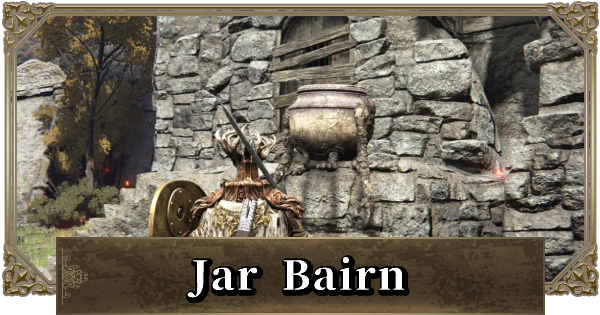 Appears At Jarburg In Liurnia

NPC Questlines To Advance With This Quest

Jar Bairn can be found in Jarburg, which is located down a cliff south of the Carian Study Hall. Talk to Jar Bairn, who is sitting on the stairs of one of the houses in the village.

How To Descend The Cliff In Front Of Jarburg

Go Speak To Alexander If You Haven't Yet

If you haven't met Alexender yet, you won't be able to proceed with the second and subsequent dialogues with Jar Bairn in Jarburg. When the Radahn Festival begins, Alexander will move to Redmane Castle in Caelid even if the player hasn't met him yet.

Do Not Give Alexander's Innards At This Point

After hearing about Diallos from Jar Bairn, Diallos will appear in a hut in Jarburg. Talk to him once he appears.

If you attack Diallos in the hut, he will turn hostile. By defeating him, you will get his very own equipment. However, it is not recommended since you can still obtain his equipment by proceeding with the questline normally. Take note that you also won't be able to proceed with Jar Bairn's questline if the NPCs became hostile.

Fast travel to any Site of Grace other than Jarburg to pass some time. When you return to Jarburg, you'll see that Jar Bairn has moved to the side of the road instead of it's usual location, so go ahead and talk to it. Afterwards, go further down the road and talk to Diallos, who is seen lying on the ground. It doesn't matter which option you pick here since Diallos will die after the conversation.

Rest at the Site of Grace and return to where Jar Bairn was. From there, you will find the Companion Jar Talisman. In addition, if you return to the location of Diallos' corpse, you can get his equipment and items, so make sure to visit the area.

Items You Can Obtain